Speculation about how much lower the unemployment rate can go has been upgraded by last week’s report showing 5.5 percent, which supplied the public with more hope for achieving full employment. So why is the Federal Reserve still holding back from an interest rate hike? A random sampling of economists finds considerable support for Fed Chairwoman Janet Yellen’s caution.

“Slack means that there are significantly more people willing and capable of filling a job than there are jobs for them to fill,” explained Yellen in a speech in March 2014. She declared that “judging how much slack there is in the labor markets” is one of the most important questions that the Fed officials consider when making monetary policy decisions. She reiterated that priority in Congressional testimony late last month.

The recent unemployment rate matches the lower bound of some economists’ concept of “full employment.” In the Fed’s latest economic projections released in December, 17 Fed officials projected the longer-run normal unemployment rate to be in the range of 5 percent to 5.8 percent. The threshold is significant as it represents the nonaccelerating inflation rate of unemployment, or NAIRU–the rate below which the economy puts upward pressure on wages and thus on the cost of living.

“According to some people at the Fed, we are already fully employed,” said BBVA Compass economist Shushanik Papanyan, a former Dallas Fed consultant. “It means that going below this full employment number will put more inflationary pressure on the economy, so inflation rate should be increasing faster from now on.” She declared that this scenario could be “problematic” as the central bank might struggle to maintain stable prices.

“But it’s all very subjective, and that’s why we need to look at the bigger picture instead of just following any mechanical rule,” Papanyan added.

The latest price index for personal consumption expenditures, which is the Fed’s preferred inflation measure, rose only 0.2 percent in January from a year earlier.

Despite the significantly declining unemployment rate, Chicago Fed President Charles Evans, one of the most dovish members of the Federal Open Market Committee, opined that the degree of labor market slack “may be somewhat larger” than most other FOMC participants think. He estimates the new “normal, sustainable unemployment rate” should be “something more like 5 percent,” compared with the majority FOMC participants’ estimates of 5.2 percent to 5.5 percent.

“There has been a lot of improvement recently, and given the outlook for the GDP growth over the next two years, I think the labor market will continue to improve,” Evans declared after recent speech. “Most of my attention now is to improve our inflation to the 2 percent target level.”

Yellen has “a dashboard of” economic indicators that she frequently talks about to emphasize the slack in the labor market. In a speech she delivered in March 2014, Yellen laid out four forms of evidence for slack beyond the unemployment rate or payrolls figures: the large number of “people who are working part-time but would like a full-time job,” the behavior of the participation rate, which is “the proportion of working-age adults that hold or are seeking jobs,” the “extraordinarily large share of the unemployed who have been out of work for six months or more,” and wage stagnation.

What do other economists think of Yellen’s methodology? There’s considerable agreement.

Reason No.1: “people who are working part-time but would like a full-time job”

To Fabian Lange, professor of economics at McGill University, the number of people who work part-time for economic reasons is still “relatively large,” but it is “no longer a big issue as the number will continue to decline with the unemployment rate.”

Reason No. 2: the low labor participation rate and the large proportion of “working-age adults that hold or are seeking jobs” 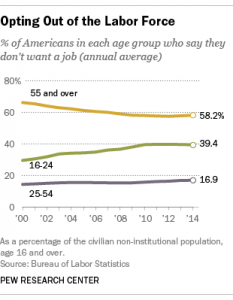 Yellen said, “participation falls in a slack job market when people who want a job give up trying to find one.” In February, 62.8 percent of the working-age population was in the labor force, compared with 66 percent when the recession began. Notowidigdo said there is no consensus among labor economists on why more people do not want to get a job. He suggested that demographics and structural changes, specifically, the “drastically reduced manufacturing jobs since 2000,” could account for the trend.

Similarly, to John Cochrane, professor of finance at the University of Chicago Booth School of Business, the worst prospect about the current labor market is “the large number of people who aren’t even looking for jobs—they have kind of given up.”

Addressing the troublesome labor force participation, which has been declining by 0.08 percentage point per year between 1997 and 2007, and its suggestion of slack in the labor market, researchers at the Chicago Fed attribute the trend to demographics, as “the oldest baby boomers hit their late fifties and began to exit the labor force.” According to their study, falling youth labor force participation for both genders contributed -0.09-percentage point per year to the change during 1997 to 2007. Since 2007, both patterns have intensified –“with the trend LFP rate falling by roughly 0.3 percentage points per year.”

The number of Americans participating in the labor force has been on a decline for years. That helps explain the low unemployment rate—the government simply excludes millions of long-term unemployed workers from the labor force.

Instead of focusing on the unemployment rate, Mark Witte, professor of economics at Northwestern University, suggested the employment-population ratio gives a “much more comprehensive picture” about the job market. It is a measurement of employed people as a percentage of the entire adult civilian population.

“The unemployment population is still very low,” Witte remarked. “So one could argue there’s a lot of slack in the economy and a lot of growth is still possible. We have a lot of quarters ahead of us of strong growth.”

Reason No. 3: the “extraordinarily large share of the unemployed who have been out of work for six months or more”

Cochrane, of the University of Chicago, noted that, although a lot of people “who were out of work for a couple of weeks can quickly get jobs,” there is “a core of people who are unemployed and have been unemployed for a long, long time.”

The long-term unemployment rate accounts for people who are out of work for more than six months and are actively searching for a job. Those who are underemployed, such as part-time workers looking for full-time jobs, are not included.

Lange stated that the high hire rate does not address the issue of long-term unemployment. “Most of the job creation over the past six years was formed from the pool of new entrants into the labor market and those short-term unemployed,” he added.

Lange and Notowidigdo, along with two other labor economists, published research in June on the persistence of the low flows of people from unemployment to employment in the aftermath of the Great Recession. The research showed that “a strong negative labor demand shock” such as a major financial crisis could build up the “stock of the long-term unemployed,” because “the longer one has been unemployed, the less likely one is to get a callback from an employer and job search effort also is likely to decline.” Ultimately, the “overall matching efficiency of labor market is reduced when the incidence of long-term unemployment is high.”

“So more of the long-term unemployed people are finding jobs,” Challenger asserted.

“If you are not happy with today’s labor market, or at least partly happy, then it’s almost like you can never be happy, because there are so many good things happening,” Challenger declared. “But the big concern is that wages have not gone up as much as economists would expect.”

Reason No. 4: the wage stagnation

The average hourly wage in January 2015 was $24.75, up by only 53 cents from a year ago. “The wage for college-educated workers has gone up quickly, but that for low skilled or semiskilled workers has been very low,” Challenger noted.

“The average wages haven’t really gone up much for the last couple of years,” Notowidigdo said. He suggested “the increasing trade with China and technical changes that reduced need for labors” could have contributed to the stagnating wages.

The latest piece of evidence that companies are feeling pressure to raise wages was the retail giant Wal-Mart’s announcement last month that it will hike its minimum wage. But little statistical evidence can be seen yet.

“I fully expect that as labor market continues to strengthen, wage growth will start to pick up,” said Yellen at a Congressional hearing last month. “It’s hard to define maximum employment, but we’d like to see wage inflation.”

The Federal Reserve Act mandates that monetary policy should work to foster financial conditions that promote both full employment and price stability. But some economists are already questioning how effective monetary policy is in dealing with the slack in the job market.

“If somebody has been out of a job for two or three years, gone on Social Security disability, and were waiting around for life while not working, is another six months of low interest rate going to make any difference at all to that?” said Cochrane. “I think monetary policy is no where near as powerful as people say it is.”

“I think the general picture is that the job market is pretty close to normal for the people who are going to get jobs,” Cochrane said. He opined that it is still “a worrisome picture” for those unemployed for very long time. “But that’s beyond the usual business cycle monetary policy effect.”

Discussion about dropping the “patient” guidance is likely to dominate the Fed’s next policy meeting March 17-18. But even if the guidance is dropped, it does not guarantee a rate hike in June.

In her semiannual testimony before Congress, Yellen declared that the FOMC will “begin considering an increase in the target range for the federal funds rate” on a “meeting-by-meeting basis” if economic conditions continue to improve, and the Committee will change its forward guidance before any changes happen. She emphasized that “a modification of the forward guidance should not be read as indicating that the Committee will necessarily increase the target range in a couple of meetings.”

“We believe the slack in the labor market is very low now,” said Papanya.

“Once you get into labor, there are a hundred and fifty different indicators to look at,” Cochrane declared. “There is this old fashion conception of labor market—that there are many jobs, and there are many people waiting around to fill those jobs. But that’s just not the way it is. Jobs are like marriages—lots of searching and matching.”