The U.S. economy ended 2016 in a better place than it started, and despite some concerns, economists remain optimistic for continued positive results under the incoming Trump administration.

A panel of financial experts shared their forecasts for the economy, the markets, interest rates and regulatory changes that are likely to impact investments and business decisions in the coming year with over 1,500 Chicago executives at the Annual Economic Outlook meeting of the Executives’ Club of Chicago Tuesday.

“I just don’t think there’s ever been a time where the installation of a new administration has created more economic uncertainty,” financial author Terry Savage, who moderated the discussion, said.

The uncertainty of the new administration that is days away, and the effects on taxes, regulation, immigration and other aspects of the economy have many business owners unsure what to expect.

“Right now we still see low growth, 1- to 2-percent growth, but there’s beginning to be the expectation, and you see it in the Trump bump in the stock market, for more growth,” Douglas Zaucha, senior strategic account manager at Dunn Solutions Group, said. “The question is why should we expect an increase in the overall economy?”

Based on an informal poll taken of attendees at last year’s Economic Outlook meeting, the economy did better in 2016 than most expected, with the Dow Jones industrial average up 4,000 points, and real gross domestic product increasing at an annual rate of 3.5 percent in the third quarter. 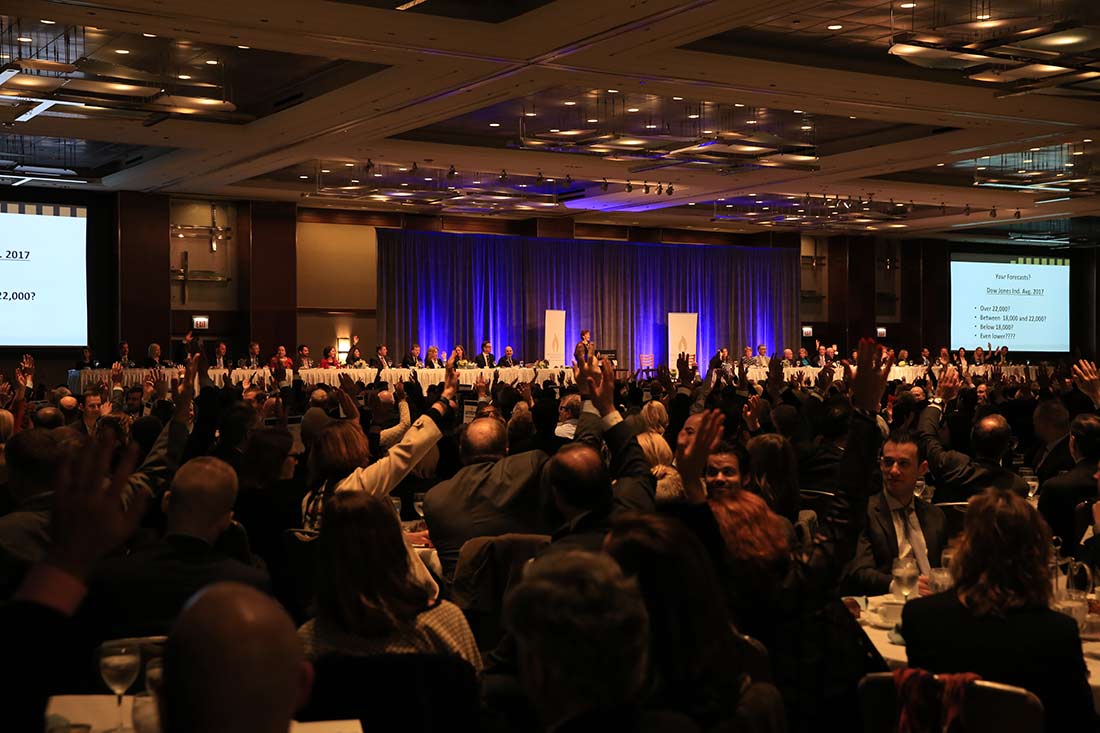 Consumer confidence is up 17 points over last December, and the U.S. dollar has been strong.

“We’re having multi-year highs in consumer confidence, but also in business confidence. This is important because the weakest link in the economy up to now has been low business investment,” said Michael Gregory, deputy chief economist at BMO Capital Markets Corp.

Rising wage levels are another positive trend, Diane Swonk, founder and CEO of DS Economics, noted, adding that leisure and hospitality wages are accelerating and entry level wages for college graduates are also picking up.

The rise in populism worldwide can also be a positive, Bob Froehlich, former director of Realty Trust Inc., said. He described 2016 as a monumental year for populist movements with the election of Donald Trump, the popularity of Bernie Sanders, and the Brexit vote in the U.K. over membership in the European Union.

“Don’t try to fight it,” Froehlich said, noting that whenever there is a rise in populism, taxes go down and regulations go down, and this is good for business.

Asked about their biggest concerns, the panel named issues such as trade, deficits, currency, and political dissonance.

“Trade is our Achilles heel,” Swonk said. If the president succeeds in imposing tariffs, we will see 2 percent inflation overnight, she added.

Swonk said she was very concerned about a potential trade war with China.

“China is already retaliating and moving really quickly to create trade agreements with many other nations, most notably Latin America, our closest trading partners including Mexico,” Swonk said in an interview after the meeting. “The problem is that the supply chain in manufacturing is so connected. If you disrupt borders, you do disrupt production here.”

Gregory was less pessimistic about the future of U.S.-China trade relations.

“I do think given the importance of the relationship, there is a lot of uncertainty in Trump’s administration, but at the end of the day they are going to work in a cooperative way,” Gregory said in an interview following the event.

Swonk also mentioned possible financial disruption due to high debt levels and unforeseen defaults as a risk for the upcoming year.

Gregory said that Canada, the largest trading partner of the U.S., and other nations are watching the exchange rate.

“The U.S. economy now is more vulnerable to currency than it’s ever been,” Gregory said.

Given the lack of a clear policy direction or road map for Congress, Swonk said she saw additional risks for the economy.

“Divergence in policy has historically given us volatile markets,” Swonk said.

Looking ahead, the panel’s estimates for GDP growth ranged from 2.1 to 3 percent. Forecasts for the unemployment rate ranged from 4.2 to 4.4 percent, down from the current 4.7 percent.

The panelists did not expect to see large interest rate increases, but predicted at least two rate hikes in 2017.

Big drivers of growth will be on the business investment side, Gregory noted, adding that the recovery in the oil industry will impact many sectors.

“The economy will run on more cylinders in 2017,” Gregory said.

Photo at top: Economists weigh in on what to expect in 2017 (Yifang (Evonne) Liu/MEDILL)