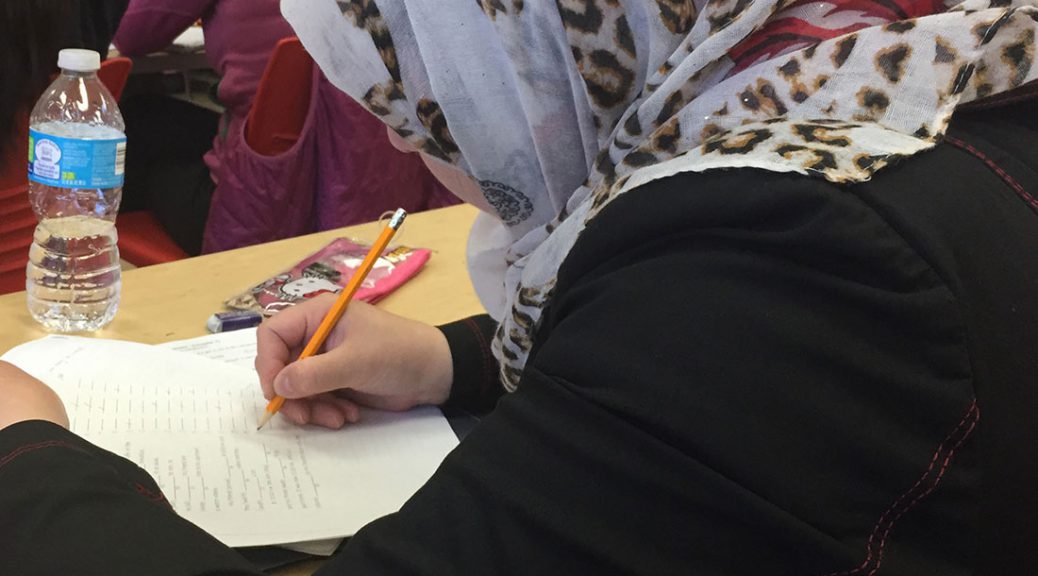 She couldn’t visit a doctor’s office without a translator. Or communicate with her children’s teachers. Or get around a city that felt daunting yet safe.

Her Syrian high school education had taught her the very basics. And the two years she spent helping her kids with their homework in Jordan had forced her to brush up on her skills. But when Um Mohammad, a Syrian refugee, arrived in the United States one-and-a-half years ago, her English-language capabilities were extremely limited.

She was determined to change that.

“In order to acclimate, you need to learn the language,” explained Um Mohammad, who asked not to be identified by name, fearing for relatives still in Syria. “And to think of staying at home [and not learning English], that’s not an option. Once you come [to America], no matter what your circumstances are, whether you’re educated or not, it’s important that you study English and try to connect with people to improve those skills.”

Her determination is much to be admired. In a system designed to push refugees to economic self-sufficiency within three to six months of their arrival, developing English-language skills is critical to survival, say experts, who work closely with refugee communities.

“Without knowledge of the English language, they can never get their way around the community, and they can’t acquire jobs that require a basic level of English skill,” said Ngoan Le, state refugee coordinator of the Illinois Bureau of Refugee and Immigrant Services.

“It’s key to survival,” she added, “but it’s also key to their successful integration. Without the English language, they would be lost.”

Um Mohammad, 36, registered for English as a Second Language (ESL) classes about two months after her family’s arrival to Chicago in February 2015, she said. Once her kids were registered in schools and her family settled into its new West Ridge home, the mother of three was prepared to learn.

The priority of learning English and finding work at the same time is a “chicken and egg” scenario, said Hadia Zarzour, vice president of the Syrian Community Network, a Chicago-based grassroots group that aims to bridge cultural and linguistic barriers for Syrian refugees.

While learning English is necessary to securing a good job, stable employment – especially for the often-male breadwinners – is essential to adjusting to a new life.

But perhaps more importantly than opening up doors for employment, learning English has a profound impact on refugees’ self-esteem, said Zarzour,

“We also see the difference in people’s body language,” the licensed mental health therapist said. “The way they carry themselves when they understand [conversations in English] changes. You see it in their eyes – their eyes glow.”

The number of Syrian refugees in Chicago has rapidly increased in recent months. About 90 of the 116 resettled Syrian families in the Chicago area arrived over the summer, Zarzour said. As of Aug. 31, 631 Syrians were resettled in the state and more than 10,000 nationwide during the current fiscal year, according to the U.S. Department of State.

But unlike Um Mohammad, few make it to the United States. More than 5 million Syrians have fled their country since 2011, when President Bashar Al-Assad’s regime responded to an anti-government uprising with brute force, plunging the nation into a bloody conflict that has taken an estimated 400,000 lives.

Um Mohammad’s family comes from the southern Daraa province, where the Syrian protest movement was born.

“We withstood the fighter jets and the shelling [by the government], but then they started raiding people’s homes and killing them,” she said. For months, her family moved from village to village in pursuit of safety, but when their house was burned to the ground in August 2012, they knew it was time to leave.

They moved to Jordan’s Zarqa province, where they registered with the UN refugee agency (UNHCR). Um Mohammad’s husband, Abu Mohammad, didn’t have stable employment because he couldn’t afford to apply for a work permit, but the elder two of their three children – now 14, 11 and 6 – attended school. English was a very minor part of the curriculum, but Um Mohammad did what she could to help her children along, relying on her education in Syria and tools like Google Translate.

They never imagined a life in America, she said, but when the offer for resettlement came, her family couldn’t say no. Abu Mohammad’s unemployment and discrimination against Syrian children in Jordanian schools made life difficult. After a yearlong process that included about seven interviews, Um Mohammad said, they boarded a flight to the United States in February 2015.

Only a handful of the Syrian refugees who have been in Chicago for at least a year have shown Um Mohammad’s commitment to learning English, Zarzour said. There are a number of factors at play, including Um Mohammad’s appreciation for education and the relative stability her family here, she added.

“Her husband has been working since the beginning,” she added. “Their resettlement agency hasn’t given them any trouble, and they have a good apartment.” An electrician back home, he works now as a cleaner at a local mosque.

Um Mohammad attends ESL classes at the Harry J. Truman College, where she is in the fifth level of classes, twice weekly. Students with no knowledge of English start at level zero. Once they pass the seventh level, they can take a special college preparation course, said Bob Hearst, adult education coordinator at Truman College.

While the college does not have a formal relationship with refugee resettlement agencies, some agencies, like RefugeeOne and Catholic Charities (which resettled Um Mohammad’s family), enroll new arrivals in classes at Truman College, said Hearst, who has taught ESL classes to refugees and other immigrants.

“The refugees tend to be among the highly motivated students, who really put a high priority [on learning English],” he said. “I think probably because they have come from a bad situation and they recognize that it’s going to make a difference to what kind of life they’re going to have in their new country,” contrasting the experiences of refugees – who cannot return to their countries of origin – to other immigrants who tend “to expect that they would return home at some point.”

Le, the state refugee coordinator, said different refugee groups have varying experiences with ESL, but those who struggle most are those whose written languages don’t use the Latin alphabet or who are illiterate in their native languages. “For them, the step of learning English is very steep,” she said.

Although not yet 100 percent proficient, Um Mohammad is shaping up to be a success story. About six months into her ESL classes, she became comfortable using English conversationally.

“Slowly, though,” she said, laughing. “You know, a lot of people speak quickly, and it’s hard for me to understand. I ask them to slow down so I can understand.”

She is proud that she can now help her kids with their homework and give directions to a stranger on the road, but she wants more.

“I have my mind set on being able to help my children and going to college. I want to be a teacher,” she said with determination, letting loose a smile.

Photo at top: Um Mohammad, 36, works on an assignment during her class at the Harry S. Truman College, where many Chicago refugees attend tuition-free English classes for non-native speakers. (Maryam Saleh/MEDILL)