Catherine Shotick, curator of the Eternal Light exhibition, spoke about the exhibit and its importance in the city of Chicago.

You can experience the exhibit, extended through March 22, at the Driehaus. Before exiting, be sure to pick up the brochure and map so you can visit other sites of Louis Tiffany’s work throughout the Chicago area. Locations include the Chicago Cultural Center at Michigan Avenue and Washington Street, the Second Presbyterian Church at Michigan Avenue and Cullerton Street, and the Marquette Building at Clark and Adams streets.

Q: Tell me about the exhibit and how the idea for it formed.

Q: What does the exhibit include?

A: We have the 11 windows on view, but we also have kind of this preliminary gallery which is about the techniques and process behind making a stained glass window at the Tiffany studio.

Q: Can you explain what they preliminary gallery includes?

A: We were thinking that people were going to want to know how these windows were made. So, we got some preliminary design drawings on loan from the Metropolitan [Museum of Art in New York].

Q: What was the purpose to creating these drawings?

A: They’d make these preliminary designs and then they would show them to clients and there would be kind of a back and forth like ‘No, I want this many figures or this many angels.’ Once they came upon a final design, they would then go into the actual making stage.

Q: Once the stained glass windows have been made, what are some of the ways people would see the pieces?

A: One way was that he was kind of a ‘marketing genius’ in his own right, and he also created an entire Byzantine-style chapel for the World’s Fair in Chicago in 1893. They [visitors] were surrounded by his ecclesiastical designs, mosaics and the bronze work. After the World’s Fair, he really became internationally known and had many more clients.

Q: Aside from the chapel, what other pieces were on display at the fair?

A: The first window that you’ll see is the Antependium Window. The designer is unknown, but they’ve really translated that velvet texture and fabric [modeled after the Antependium cloth] into glass. This next gallery shows some examples of his ecclesiastical designs that aren’t stained glass windows including marketing pieces that Tiffany actually wrote.

Q: How many windows do you have on display? And, what time periods are the pieces from?

A: There are 10 windows throughout the rest of the museum and they range from the earliest one, circa 1885, to the latest, circa 1925, before Tiffany Studios closed in 1932.

Q: How did you decide on the sections for the exhibit.

A: It just kind of came naturally. We had the Antependium Window, so I knew that I wanted to do something with the World’s Fair. It then went into how he marketed his ecclesiastical designs and then to what went into making a window. I decided to organize it that way by knowing what questions people would ask.

Q: Tell us a little more about museum.

A: We’re situated in an 19th century Gilded Age mansion. The Nickerson’s, the people that lived here, were living at the same time that Tiffany was living, so it’s like an immersive environment. 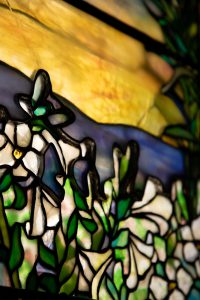 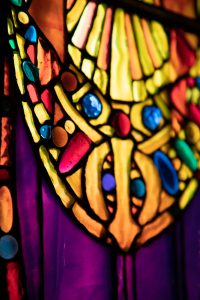 To visit, you can purchase tickets at the museum located at 40 East Erie Street, Chicago, IL or visit the Driehaus Museum’s website. The exhibit will remain open to public until March 22 and tickets range from $10 to $20; and is free for children under 13.

This interview has been edited for clarity and brevity.

Photo at top: The room pictured is the introduction to the stained glass portion of the exhibit, including a late 19th century piece commemorating the death of 10 women.
(Michaela Schirra/MEDILL)