Even though it surpassed fourth quarter earnings expectations, Federal Signal Corp. saw its shares nosedive Monday after the manufacturing company issued pessimistic guidance for its 2016 performance.

The share price of the Oak Brook, Ill.-based maker of safety and environmental-services equipment dropped by 22 percent, closing the day at $11.86.

Investors responded to warnings from company officials that the coming year would a be tough one, with slumping oil and gas markets expected to hurt Federal Signal’s industrial customer base. As a result, Federal Signal forecast full-year adjusted earnings per share (EPS) in the range of 70 to 80 cents, well below the Bloomberg consensus estimate of $1.02.

“Similar to other companies that have recently provided guidance, we expect 2016 industrial markets to be challenging,” said president and CEO Jennifer Sherman in a conference call with analysts. “The broader impacts of the oil and gas downturn are expected to reduce our 2016 operating income by $12 to $14 million.”

That beat by 5 cents the Bloomberg analysts’ forecast of 22 cents per share, but coming in above expectations was not enough not prevent a steep slide in the company’s stock price given its gloomy outlook for 2016. 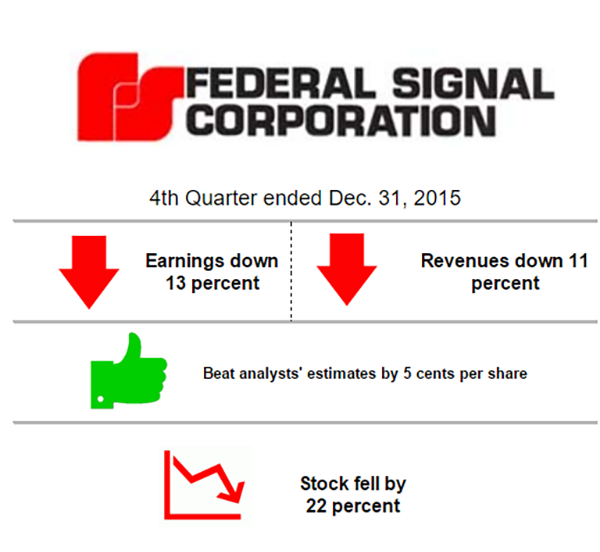 Seaport Global securities analyst Walt Liptak highlighted unfavorable price competition from used equipment as a significant roadblock in the coming year and beyond.

“The company called out weak oil and gas trends lowering used equipment prices, which is resulting in lower demand for new equipment,” wrote Liptak in a report. “Federal Signal is unsure when this excess equipment will work through the channel, but management initially estimated that it could take up to 12 to 18 months.”

Seaport Global revised down its full-year EPS forecast to 75 cents from its previous estimate of $1.07.

“It [Federal Signal] is still a sound financial investment, but it doesn’t have the same capital appreciation that we recently thought it did,” said Liptak.

The company’s Environmental Solutions Group, which normally accounts for about two-thirds of its sales volume, had a particularly rough quarter as group revenue declined by 13 percent to $124.3 million. Officials pointed to soft domestic demand for its vacuum trucks and sewer cleaners as the main cause of lower sales by that group.

While Q4 revenues were off from the year-ago quarter, Federal Signal remained optimistic about its long-term performance potential and highlighted the strength of its cash flows and debt position. CFO Brian Cooper said that the company’s total debt stood at $44 million at the close of the year, compared to $50 million at the end of 2014. End-of-year cash on hand was $76 million, more than three times the $24 million in its coffers the year before.

Sherman said the January 29 sale of the Bronto Skylift business, the last remaining brand in its now-discontinued Fire Safety Group, will give Federal Signal the flexibility to pursue new growth initiatives.

One such venture was announced at Monday’s earnings call, when the company revealed that it will acquire the assets and operations of Joe Johnson Equipment Inc., a Canadian distributor of new and used street sweepers, pump trucks, and snow removal machinery. That acquisition comes on the heels of the January purchase of Westech Vac Systems Ltd., another Canadian firm that manufactures pump trucks.

Photo at top: An Elgin street sweeper, made by Federal Signal, cleans a street in West Torrance, Calif. (mark6mauno/FLICKR)