As Illinois Tech point guard Anthony Mosley stands at the foul line ready to shoot, the Keating Sports Center falls silent. The freshman standout bounces the ball, the sound echoes throughout the gym, and no one moves except some Illinois Tech students standing in front of a sign that reads “Hawk’s Nest.”

They raise their hands until the ball falls through the net, and the audience cheers.

But today, Illinois Tech is building its sports culture by supporting the Hawk’s Nest student group, adding a men’s volleyball team and improving collaboration between the athletic department and the admissions office. And in two years it will be eligible to play in NCAA Division III tournaments for the first time.

“We’re trying to build our culture so that freshmen don’t come in and see a team full of misfits,” said Katherine Zulandt, head men’s volleyball coach. “We’re recruiting kids who are excited about IIT.”

In 2013, Illinois Tech started the NCAA application process and entered a four-year provisionary period. Since then, it has been transforming its program to be more competitive.

Last year men’s basketball coach Todd Kelly recruited and created the youngest team in the United States Collegiate Athletic Association conference with eight freshmen. This winter freshman guard Mosley led the team in scoring as it doubled its wins from two in 2015 to four in 2016.

This year Illinois Tech converted its men’s volleyball club team into a USCAA Division III intercollegiate team. Zulandt coaches both teams with varied results. The women’s team ended its fall season 13-19. The men’s team started in the winter and has yet to win a game.

Zulandt said both teams have opposite problems. The women’s team is more competitive, but undermanned with only five returners for next season. The men’s team has a full roster with little experience.

Recruiting quality athletes is a top priority for both coaches, but they also emphasized attracting students who can meet Illinois Tech’s academic requirements. The national average ACT score is 21; at Illinois Tech, it’s 28.

Athletic director Joe Hakes gave the sports culture a C grade, but said the biggest improvement was an increased proficiency in Division III recruiting “in our office, admissions, and academics.”

Hakes said the athletic department was previously viewed as a separate entity from the rest of the school.

“Last year we weren’t getting referrals,” Hakes said. “This year we did. [Admissions] understands that we’re looking for the same students.”

Hakes credited Illinois Tech’s new Provost Frances Bronet, previously a dean at the University of Oregon, for serving as a bridge between academics and athletics.

Bronet was unavailable for an interview, but Hakes said the communication has helped boost the sports culture.

“I think the dialogue is good,” Hakes said. “I think the staff makes an effort to be at things that are athletically oriented. The next step would be for them to come to games, but given that they don’t live in the area, it’s tough.”

“People are interested in seeing the freshmen Kelly brought in,” Hakes said.

Joshua Harris, class of 2015, started the Hawk’s Nest in the fall of 2014 to draw students to athletic events. The idea started as an inter-professional project, or IPRO, a required course that integrates multiple majors.

“I [noticed] all of our sports games were empty,” Harris said. “Why? So I proposed the idea, did the research and conducted interviews.”

“If you come to a game or event, you get a point,” Harris said. “Anything related to Hawk’s Nest, you swipe your school ID on a scanner, and it would tally up your points. For one week before finals, we redeem the points and you can get whatever items your points were worth.”

The grand prize was an Illinois Tech hooded sweatshirt, and the combination of points and event prizes brought more fans. 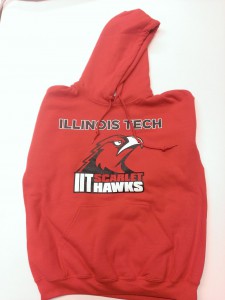 This shirt is a Hawk’s Nest prize. (Joshua Harris/ILLINOIS TECH)

“I think the biggest [turnout] was on Halloween,” Harris said. “The volleyball team had a costume contest, and we brought pizza and we offered points and prizes. If you won the costume contest, we provided the first place prize and a point for attending. You got a knit hat and a T-shirt.”

Zulandt, who coached the women’s volleyball team during the Halloween costume contest, said the Hawk’s Nest always helps bring students to games. “This year they’re a little sporadic,” Zulandt said. “But when they’re there, they’re awesome.”

Harris graduated, and Chris Alexander took over as the group’s new chair. He said he hopes to meet the standards Harris set by helping them feel the “passion for the Scarlet Hawks that they had when they first arrived as freshmen.”

A sports culture gives students an overall positive experience and makes Illinois Tech more visible, said Hakes. “If you walk around downtown, you see someone in an Illinois Tech sweater. Obviously, with athletics, it’s free publicity in the paper. It’s just good to have your name out there.”

He also said he knew of no interest in forming a cheerleading squad, and the school’s mascot, the Scarlet Hawk Talon, “didn’t show up much this year.”

Hakes has spoken to the school’s VanderCook College of Music about starting a pep band, but that brought complications.

“The problem is a lot of places pay a pep band,” Hakes said. “If you pay a pep band, but you’re not giving scholarships to your athletes, that’s an odd situation. It’s something we’ll look into and try to figure out.”

Hakes also plans to raise money, mainly through alumni. He gives his goal in terms of donors instead of dollars. His target number is 150.

A good sports program improves student life, morale and loyalty, he said. “We’ve got a great opportunity to give them an extra layer of education, and that takes time to build. I think it’s a fun challenge. It’s a challenge that sometimes you don’t feel at the end of the day you make a whole lot of progress, but you keep plugging away.”

Photo at top: The Hawk’s Nest sign hangs over the bleachers in the Keating Sports Center. (Grant Miller/MEDILL)