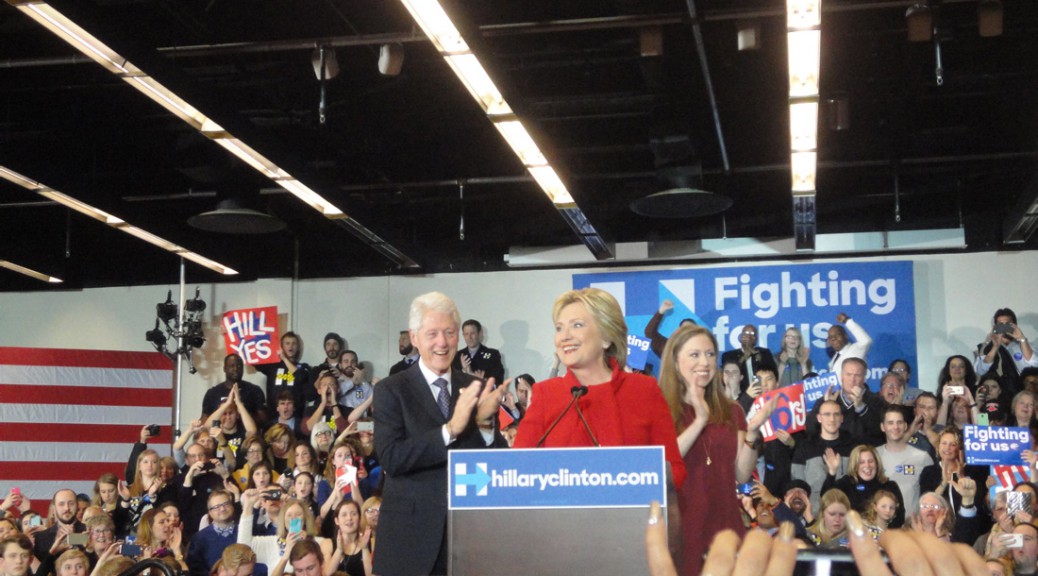 DES MOINES, Iowa – As the Democratic primary race has tightened between Hillary Clinton and Bernie Sanders, some pro-choice organizations nationally have announced their endorsement of the former secretary of state based on her “excellent record” in support of women’s rights, and the likelihood that she would expand on that were she to be elected to the White House.

“Hillary Clinton has a track record as a champion of issues that affect women, families and reproductive freedom,” said Anne Bailey, deputy field director for National Abortion and Reproductive Rights Action League Pro-Choice America, and a volunteer with the Clinton campaign in Cedar Rapids, Iowa. “NARAL endorsed her because she talks to people about issues that matter to our members, like access to paid parental leave, gender discrimination in the workplace, birth control and abortion.”

Planned Parenthood also announced in January that it would endorse Clinton. It is the health organization’s first presidential primary endorsement in the 100 years since its foundation. According to Brigid Leahy, director of government relations at Planned Parenthood Illinois Action, the nonprofit’s political arm in the state, not only is Clinton framing her policies on women’s health in continuity with President Barack Obama’s, but she also promises to move forward and do more.

“Obama has been wonderful in his support of reproductive freedom and the services that Planned Parenthood provides, not only as a president but also as senator of Illinois,” Leahy said, referring to Obama’s recent veto on an early January House bill that would have repealed the Affordable Care Act and defunded Planned Parenthood. “But unfortunately, he has to leave office. Hillary Clinton is a leader. We hope that she will build on what Obama did to make even more proactive choices.”

Leahy said that while many male elected officials are very supportive of reproductive freedom and Planned Parenthood, Clinton being a woman means that she knows better her male counterparts what is at stake in the right to seek an abortion or use birth control.

“I don’t want to discount men,” Leahy said. “But I do think that there’s something to be said about a woman fighting for reproductive freedom. She would bring perspective on the issue as the first female president.”

Planned Parenthood Action recently published a side-by-side comparison of Clinton’s and Sanders’ records on women’s health issues. The nonprofit concludes its overview of the candidates’ policies by saying that while they are both “good on reproductive health,” Clinton “pushes harder.”

“If Bernie were to get the eventual nomination, we would continue to fight to put a supportive politician in the White House,” Leahy said. “He has a pro-choice record and defends Planned Parenthood, so we would work with him. But our choice to endorse Hillary has to do with the depth and breadth of her record on women’s health.”

Bailey said Clinton has been bringing women’s rights to the table way more than Sanders. To back up their endorsement of Clinton with support from voters in the primary, she and other NARAL activists have been canvassing in Iowa and across the country since last spring to put the issue of reproductive freedom under the spotlight on the campaign trail.

“Iowans have been incredibly receptive. We knocked on door after door and we had a yes rate of over 50 percent,” Bailey said. “That means over 50 percent of people we talked to pledged to caucus for reproductive freedom.”

Meanwhile, from their rally podiums in Iowa, both Clinton and Sanders stood in support of reproductive freedom and called the Republican candidates out for advocating policies that would deny women basic reproductive rights.

Clinton referred to Republican efforts to pass anti-abortion legislation and suspend federal funding to Planned Parenthood as an attack on human rights. “I fundamentally disagree with them,” she said at a rally in Cedar Rapids the weekend before the Feb.1 caucuses.

Sanders threw a sarcastic jab at candidates in the opposing party for touting themselves as champions of American families while in truth, he said to a crowd of supporters in Davenport, “what they’re telling you is that if you’re a woman you cannot and must not control your body.”

Some Republican caucus-goers in Iowa did not deny that, and were fierce in condemning Democratic support of a woman’s right to choose for herself and her own body. “Life begins at conception and Ted Cruz supports that wholeheartedly,” said Mary Jane Woodward, an independent Baptist who came out in support of the Texas senator at a rally in Iowa City on the eve of the caucuses.

In arguing her anti-abortion stances, Woodward said women who choose to have pre-marital intercourse and get pregnant as a result are automatically forfeited the subsequent choice of whether to keep the baby or not. “It’s your fault for doing that, not the baby’s fault,” she said. “If a woman sleeps with a man outside the boundaries of a marriage without protection, there’s a deviant soul inside of her, and then it becomes too late for another choice.”

Woodward said women should give the baby to a Christian home instead of seeking an abortion. She added that according to her, there’s something deeply wrong about Planned Parenthood, and “God is going to judge America for that.”

For Bailey, the right to choose whether and when to start a family is fundamental, and so is supporting a presidential candidate who recognizes that right.

“We need a leader like Hillary Clinton in the next administration,” Bailey said, “because it will determine how women and families fare in decades to come.”

Photo at top: Hillary Clinton speaks at Drake University in Des Moines, Iowa, on Feb. 1 as she enjoys a slight lead over Bernie Sanders at the caucuses. Clinton received the endorsement of some pro-choice organizations for her record in support of reproductive freedom. (Enrica Nicoli Aldini/MEDILL)