Fall marks the time of year when most people in the Chicago pack away their swimsuits and say goodbye to the beach.

For surfers who live for the challenges of the lake, fall marks the time of year when waves get bigger and groups clad in wetsuits congregate at various beaches around Chicago and Northwest Indiana to ride the waves in frigid water. As the fall transitions into winter and the air becomes colder than the lake, the wind creates bigger waves due to increased air pressure as the wind blows across the surface of the water. That’s why more lake surfers can be seen out in the fall and winter than in the summer.

Rex Flodstrom, an artist and surfer, started surfing in California before moving back to his hometown of Chicago, where he discovered the lake surfing community. To many, the idea of surfing in the cold Midwest winters might sound painful and crazy. But to Flodstrom, and most surfers, the option to surf outweighs the cons of the cold.

“It’s either that or don’t surf. And even if it’s cold, if you have the right gear you can stay warm and have a good session, so it makes it worth it,” Flodstrom explained.

Lake surfers are in touch with changes in weather and lake patterns in a way unlike the majority of people living near the Great Lakes, as the window for finding good waves is very short in the Midwest and can suddenly change in a matter of hours.

“To surf the Lakes you have to be an amateur weather [forecaster]. It’s a never-ending pursuit of waves. On the ocean you can have a swell that will last for days, where here it will only last for a couple of hours. You have to be in the right place at the right time and that’s always a challenge,” Flodstrom explained.

This year, Lake Michigan reached record high water levels in July, making headlines around the country due to the dangers the water poses for swimmers and water lapping onto Lake Shore Drive. Beach erosion became obvious along the entire lakefront.

No group of people is more aware of the effects of the high waters than Chicago-area lake surfers, who have witnessed erosion radically change the shape of the beaches they surf on. At the Portage Lakefront and Riverwalk in Portage, Indiana, the beach erosion is unmistakable. An entire tree lay with roots exposed in the middle of the water, fallen off the bluff too far eroded to hold its weight; underneath the tree, concrete slabs litter the shore, broken off from the pier. A circular cement viewing area, once stationed on top of the dune, now sits in the middle of the shore; a wooden picket fence falls off the bluff; and the metal walkway that once extended above the beach is now half underwater.

According to Flodstrom, the beach itself has shrunk. And where there was once room for people to lay towels down and hang out on the beach, there is now a sand dune.

“I’ve noticed a lot of changes at this location,” Flodstrom said, adding, “There’s a lot of sand erosion. There used to be a more gentle path down to the lake, and now it’s a steeper path. It’s partly the sand erosion and partly the high water.”

Aside from concerns about water levels and beach erosion, surfers face a constant battle due to the surrounding industries. U.S. Steel and the Whiting B.P. oil refinery loom on either side of the beach. Both were cited by the U.S. Environmental Protection Agency for chemicals spilled into the lake. In 2017, U.S. Steel dumped nearly 300 pounds of hexavalent chromium into Lake Michigan, and a number of surfers joined a lawsuit against U.S. Steel for violating the Clean Water Act. The lawsuit is still pending.

A “revised consent decree to resolve alleged violations of the Clean Water Act and other federal and state statutes by U. S. Steel at its Midwest Plant in northwest Indiana” was filed by the U.S EPA on Wednesday.

While many surfers say they have had adverse reactions to surfing in the water, such as rashes and other symptoms, drawing a clear correlation can be difficult.

“Who knows what the long-term effects are?  We’re sort of like the canaries in the coal mine. We’re in a science experiment. Hopefully people are okay. I think in the off season the Lake isn’t tested as much as it should be, so no one really knows what’s in the water or what they’re exposing themselves to,” Flodstrom said.

Peter Matushek stands next to a circular cement viewing area at the Portage Lakefront, which used to sit on top of the dunes. The cement circle is now in the middle of the shore. (Lucia Whalen)

This tree stood on the dune overlooking the water only a year ago. Much of the bluff has eroded, the sand no longer able to hold heavy weight, which caused the roots of the tree to lose old and fall into the water. (Lucia Whalen) 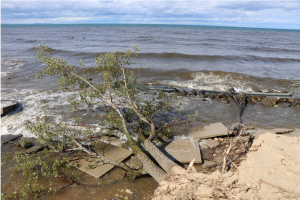 Rex Flodstrom surfs in the afternoon. Rex, and most surfers, track the weather and water patterns daily and make plans to go out day-of.

A wax-covered surfboard. Wax creates an adhesive surface that helps surfers stick to the board while surfing. While the underside on the water stays slippery, allowing for smooth surfing, a good wax creates a slightly bumpy surface, giving feet a slight grip. (Lucia Whalen) 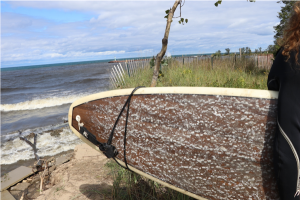 Surfer and photographer Mike Killion tests out the stability of the edge of the bluff. The sand on the bluff’s edge is crumbling and unsafe to stand on, as it cannot hold much weight. (Lucia Whalen)

The Chicago skyline sits as a backdrop beyond the Portage Lakefront and Riverwalk.(Lucia Whalen) 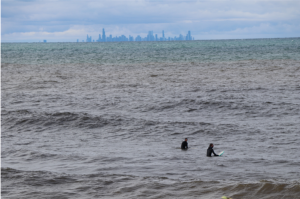 A surfer looks out over the metal walkway, which is now engulfed in water. (Lucia Whalen)

A fence that once stood on the bluff has fallen due to the sand erosion. (Lucia Whalen) 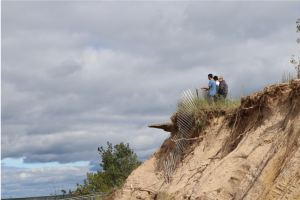 Most lake surfing happens in the cloudy cold weather months and during tumultuous weather, as extreme weather lends itself to bigger waves. However, surfers do catch the occasional sunny day. Here Rex Flodstrom looks out at the water after an afternoon of surfing. (Lucia Whalen)