Wall Street had hoped that United Continental Holdings Inc. would stage a turnaround in 2017 after years of merger-related problems. But higher oil prices and rising labor costs are clouding the outlook.

Chicago’s hometown carrier has had poor operational and profit performance since its merger with Continental Airlines in 2010. United, once the world’s largest carrier, has since become what analysts call a “problem child” in the U.S. airline industry.

2017, however, is a pivotal year for the company’s new management team, led by CEO Oscar Munoz, to transform the company, analysts said.

“If you see those further improvements, then I think you are going to see potentially the stock going higher in 2017,” said Chris Higgins, an analyst with Chicago-based Morningstar Inc. “But i think it’s kind of a show-me story now for investors.”

Shares of United have risen 26.3 percent over the past year to close at $72.54 on Thursday. That compares with a gain of 18.76 percent for the Standard & Poor’s 500 Index in the same period.

Out of 18 analysts covering United, 11 rate the stock a “buy” and seven call it a “hold,” according to Bloomberg. Their average 12-month target price for United’s shares is $85.44, 18 percent higher than Thursday’s closing price.

The sector, including United, attracted a $10-billion investment from famed value investor Warren Buffett’s Berkshire Hathaway Inc., over the past five months.

Light at the end of the tunnel

The No.3 U.S. airline by passenger traffic has had lagging profit compared to other legacy carriers. The company said in a January conference call with analysts that its focus in 2017 is to improve margins and that the airline is on track to boost profit by $4.8 billion by 2020. 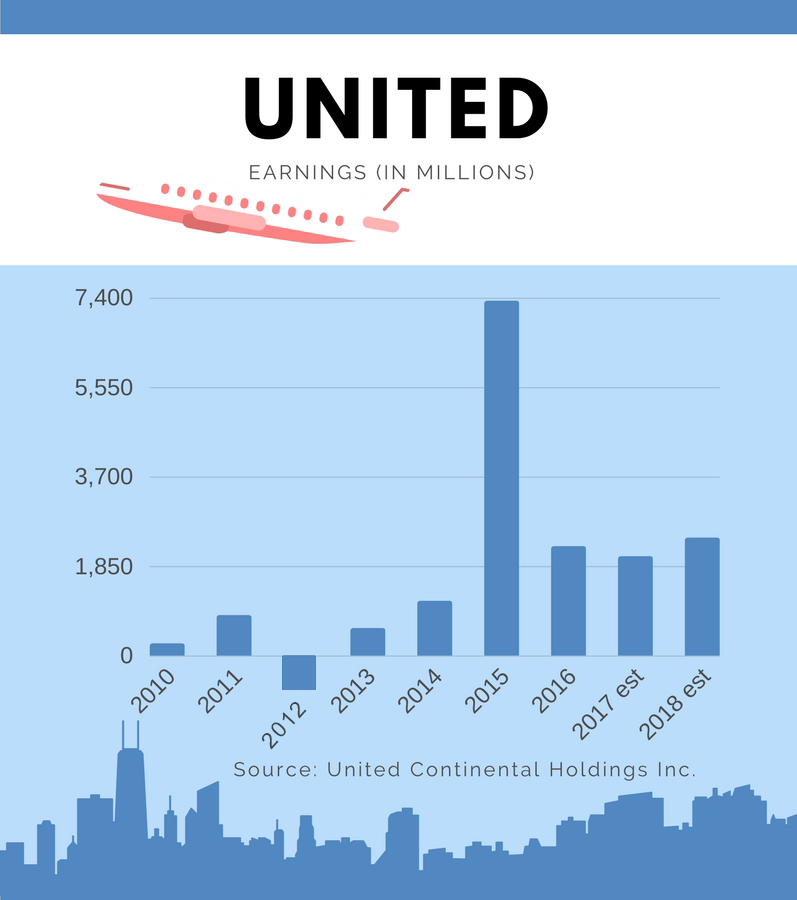 Wall Street’s concerns over the troubled carrier have eased in recent months as management, under Munoz, took steps to improve performance, including fortifying flights and hubs, updating the airline’s yield management system and improving labor productivity.

Munoz took over United in fall 2015 after then-CEO Jeff Smisek and two others resigned amid allegations the company reinstated a money-losing route that benefited the chairman of the Port of Authority of New York and New Jersey in return for preferential treatment.

As part of its route network revitalization plan, United will add 47 new daily domestic round trips as early as June. The flights will add nearly 8,700 additional seats per day and about 90,000 new flight miles, the company said.

Joe Schwieterman, a professor and transportation expert at DePaul University, said domestic capacity expansion is a positive sign for United as it has the best hub system among the major airlines.

“Domestically it’s looking pretty good right now, and that’s probably where most profits are going to be,” Schwieterman said.

United operates more than 4,500 flights a day to 339 airports across five continents, according to the company.

Helane Becker, an analyst at Cowen & Co., calls United a “sleeping giant” that has significant earnings potential despite operational missteps over the past few years. However, the Pacific region is key to the company’s turnaround, she wrote in a Jan. 19 note.

“The concern we have is related to [foreign exchange], as the USD continues to strengthen against major currencies in Asia,” Becker said. “If we see a turnaround in the Pacific, there is potential upside to earnings estimates at United.”

Higgins, who has a neutral rating on the stock, is taking a wait-and-see approach.

“Right now, do I see a compelling reason to get into the stock? No,” he said. “I want to see some more traction on what management is doing.”

Still, he believes that United will start to close some of the margin gap with industry leader Delta Air Lines Inc. in 2017.

Morgan Stanley analyst Rajeev Lalwani raised his target price on United’s shares from $78 to $81 in January due to the company’s improving pricing trends.

Lalwani wrote in a Jan.19 research note that while United is moving in the right direction, the company’s low margins will continue through 2017.

J.P. Morgan Securities LLC’s Jamie Baker recommends that investors buy United shares as he believes in the executive team’s ability to turn the company around.

“The path ahead is very difficult, but this management team gives United its best chance of success,” Baker wrote in a Feb.1 research note.

However, risks remain as the carrier is highly leveraged to fluctuations in air travel demand, Baker said.

“Should the US and/or global economy strengthen less than currently expected, our earnings and financial projections could be negatively affected,” he wrote. “If jet fuel prices trend higher in a sustained fashion, our UAL estimates could be reduced.”

China, where United has 45 daily flights to and from the U.S., is another risk, he wrote. If the world’s second largest economy continues to see sluggish economic growth, United could face greater pressure on its profitability, Baker noted.

Higgins sees little reason to worry about China. Demand for air travel is strong in China despite a slowing economy, and it continues to transition to a consumer-driven economy from an investment-driven one.

“As long as that consumer-driven part of [the economy] grows, you are going to see air travel stand up fairly well,” Higgins said.

After the merger with Continental, United suffered from poor on-time performance, partly due to failed integration of the two carriers’ labor groups, experts said.

The carrier ranked No.5 among U.S.-based airlines in 2016 in on-time performance with a 81.7 percent on-time arrival rate, according to the U.S. Department of Transportation.

United’s management has pledged to improve its historically acrimonious relationship with employee groups, something that has dogged the company for decades.

In a February interview with Business Insider, Munoz said he learned by listening to employees that their grudge against the company was personal.

“I’m not moving anywhere with this company until we fix these personal issues,” Munoz said.

Last year, United took a big step forward in labor relations. Flight attendants and mechanics union groups ratified new contracts with the carrier for the first time since combining the labor forces.
The airline also secured contract extensions with pilots, dispatchers and other employee groups, hence the higher labor costs for this year.

“The integration problem seems to be behind them,” Schwieterman said.

To compete against ultra-low-cost carriers, such as Spirit, Frontier and Allegiant, United rolled out a basic economy fare class last month.

Some analysts see the program as a revenue driver for the legacy airline.

“It’s basically a stealth fare hike,” Higgins said. “It’s pushing people from basic economy into economy because they’ll say that, ‘Well, I don’t want to buy a basic economy ticket because I want certain things like a seat and other amenities.’”

Delta has been successful with this tactic, and so United and American are following suit , Higgins said.

But Schwieterman said he thinks basic economy is a tough challenge.

“It’s pretty clear that those ultra discounters will continue to grow, and I am not sure we know that the basic economy idea is going to work, given quite some confusion in the minds of buyers.”

United said it expects 2017 capacity to increase 1 percent to 2 percent over 2016. But, said Higgins, ultra-low-cost carriers expect to expand capacity by double-digit percentages this year.

The carrier is also introduced a new Polaris business class seat, which debuted last month on its Boeing 777-300ER fleet.

Analysts are watching closely to see whether these moves are successful.

“By the end of the year, I think that if you are not seeing a turnaround United, then I think the market might sell out on them,” Higgins said.