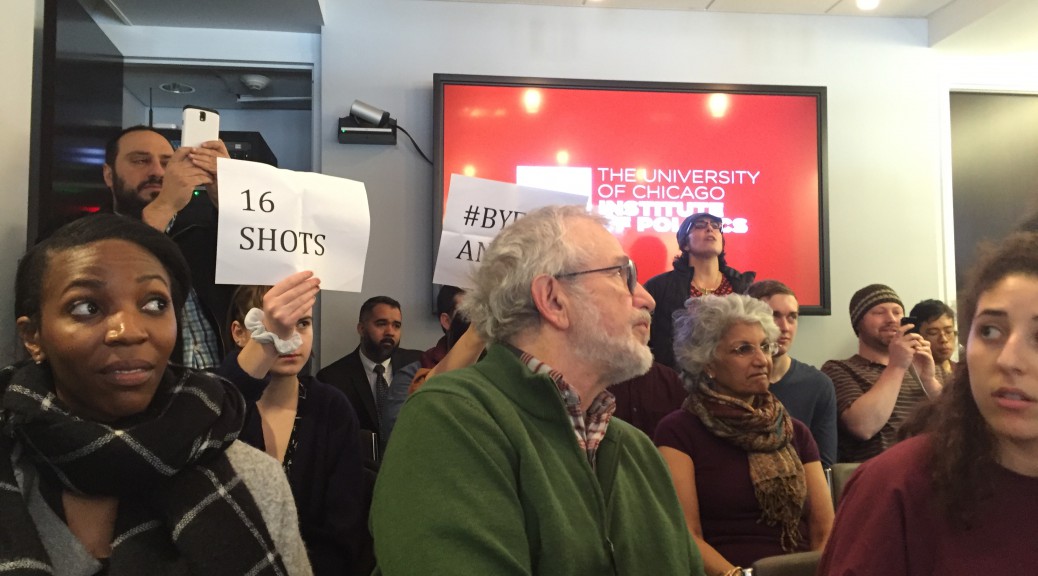 Protesters interrupted Anita Alvarez at a discussion Wednesday at the University of Chicago Institute of Politics (IOP), where the Cook County State’s Attorney planned to talk about her work and her re-election.

The conversation with Alvarez followed similar exchanges that featured challengers Kim Foxx and Donna More. Although those events went according to plan, attendees at the Alvarez event began protesting less than 12 minutes after the start of the program.

“Mic check!” yelled a protester from the back of the room at 57th and Woodlawn. “Anita Alvarez does not believe black lives matter.”

Several young members of the audience then held up paper signs that said, “#ByeAnita,” “16 shots,” and “fire Anita.”

Steve Edwards, Executive Director of the IOP, made repeated attempts to talk to the protesters, suggesting that they had had their opportunity to speak. Eventually, Edwards announced that the State’s Attorney had left the building. He later confirmed that Alvarez waited for the protest to finish and wanted to continue the conversation, but chose to leave when IOP staff struggled to calm the attendees. The State’s Attorney’s office did not confirm this despite attempts to get a comment.

As protesters and several audience members walked out of the building to show their support, University of Chicago police entered and guarded the doors.

“While we certainly have had other candidates here in this race, we also wanted to have Anita Alvarez because we think it’s important for all of you, including the students who’ve had and continue to have deep, deep concerns about her office and her office’s handling specifically of the Laquan McDonald case,” Edwards told the remaining audience members.

The protesters’ affiliations are unknown, although Edwards suggested they might have been associated with Black Youth Project 100.