TIF – or tax increment financing – is maybe the most sometimes-controversial, sometimes-coveted, little-understood financing tool at the City of Chicago’s disposal. It’s also potentially more important than ever to the city, with the twin threats posed by a missing state budget and a likely decrease in federal funding on the horizon. There are currently 146 TIF districts in the city, and according to Cook County Clerk David Orr, one in five Chicago properties is part of a TIF zone. This Q&A will answer some basic questions about a program at the center of Chicago’s budget debate.

A: TIF stands for tax increment financing. It’s a process through which the amount of property tax a designated area collects is frozen at a certain point, with all further revenue increases put aside as strictly for use within the district. According to City officials, this encourages investment in blighted areas where developers would be otherwise difficult to attract. Investment is theoretically drawn to the area when TIF funds pay for improvements to local infrastructure and cover portions of the costs faced by private developers. 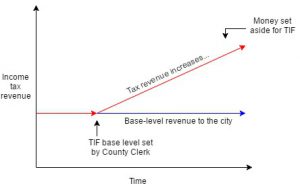 After the base value is set by the Cook County Clerk’s office, all future increases in revenue are set aside for TIF investment while the base value continues to accrue to the City. (Derek Robertson/MEDILL)

Q: How are these districts designated?

A: TIFs are required to be built in zones designated as “blighted” by a consulting firm, hired by the City. Zones are established for a 23-year period, and much of the criticism of the program focuses on revenue collection from areas that were once destitute but have experienced huge increases in property tax revenue, such as the West Loop. The TIF funds accrued in these wealthier areas are sequestered from the larger City budget, and critics claim this starves programs like Chicago Public Schools and forces them to request larger levies to make up for the missing funds.

Q: Where is TIF money spent, and who spends it?

A: When a TIF is formed,  the City Council must approve a redevelopment plan written by its outside consultant, but the district can make changes to the budget anytime thereafter. Those plans and amendments are accessible on the City’s website. That transparency meets its boundary, however, when it comes to the specific expenditures made by the City – its website contains a spreadsheet of funding sources and expenditures, but expenditures are itemized only in broad terms such as “development” and “public improvements.”

Q: How much of my tax money goes toward TIF projects?

A: This information wasn’t revealed on an individual basis until 2014, when the first property tax bills went out to taxpayers featuring an exact dollar amount. This was part of a years-long effort for transparency in the TIF system led by Cook County Clerk David Orr, progressive aldermen including Scott Waguespack, 32nd Ward, and former Ald.  Miguel Flores, 1st Ward, as well as extensive reporting like that done in a series by Ben Joravsky of the Chicago Reader. The Clerk’s website includes a wealth of information on how and why TIFs are implemented, including a detailed map of the City’s 146 districts.

Q: Why is TIF in the news today?

A: At a TIF forum held by Orr last Thursday, City representative Aarti Kotak pointed to the recent Whole Foods development in Englewood as a model for TIF usage, and a representative of the Metropolitan Planning Council hailed the use of a similar program to ensure funding for CTA improvement, starting with the upcoming Red Line expansion. Much of the recent discussion, however, has questioned the efficacy of marking large amounts of tax revenue off-limits when some city services are starved for funding. The idea of using surplus TIF funds to fill holes in CPS’ budget has been kicked around for years, and was suggested again by Gov. Bruce Rauner this week before his budget efforts were criticized by Chance the Rapper in announcing his $1 million arts education gift. Mayor Rahm Emanuel has recently discussed with 47th Ward Ald. Ameya Pawar the possibility of passing an ordinance requiring surplus TIF money to be returned to programs outside the TIF’s boundaries. In a city undergoing rapid gentrification while its public schools struggle to fund a full year, the debate around millions in tax revenue placed aside at the city’s sole discretion is sure to continue.

The Morgan Green and Pink Line station, which opened in 2012. The stop is part of the Kinzie Industrial Conservation Area, the City’s fifth wealthiest TIF zone. (Photo by Steven Vance, via Creative Commons)