Each of the 12 regional Federal Reserve banks has a different method for reporting and writing its section. Some economists make in-person visits to local companies throughout their region. Others distribute digital surveys to area contacts or host roundtable discussions.

Information about economic conditions in Chicago, Detroit, Milwaukee and Indianapolis, as well as all of Iowa and more than half of Illinois, are described in the Chicago bank’s section of the report. The Cleveland Fed works with all of Ohio, eastern Kentucky, western Pennsylvania and the upper panhandle of West Virginia. The Minneapolis Fed manages one of the largest geographic regions of any district bank: the entire states of Montana, Minnesota, North Dakota and South Dakota, as well as northwestern Wisconsin and Michigan’s upper peninsula. Its population size, however, is the sparsest of any district. 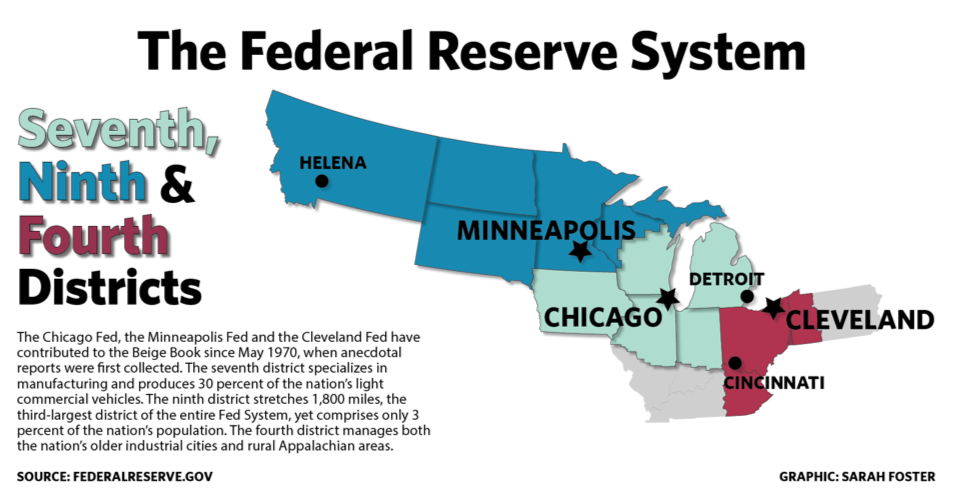 Martin Lavelle, an economist at the Detroit branch of the Chicago Fed who works on its section of the report, is always on alert for potential Beige Book contacts. He searches for them while reading business articles or while speaking to local chapters of national finance and business organizations. The Beige Book takes up less than half of his responsibilities, he said, but recruiting sources remains in the back of his mind.

“We have people changing jobs at a pretty fast rate. If I see a potential contact I like, I want to investigate it further and quickly, so I don’t lose track of them,” he said.

Chicago Fed economists had primarily cold-called sources, but now they collect information through a survey, Walstrum said. Recipients respond to nine questions relative to their specific industry regarding topics that predict business conditions, such as wages, prices and spending, he said.

The Chicago bank sends the survey to its entire 500 contacts, Walstrum said. The majority of those recipients are business executives, but economists at academic institutions are also on the list. About 100 recipients typically respond, with 60 to 70 doing so regularly, he said.

The number of recipients has increased over time, Lavelle said. If he meets a contact after one of his speeches who has an insightful, exceptional idea that also reveals what’s happening in the region or in their specific industry, Lavelle will add that person to the list.

Simultaneously, the Chicago bank also invites its contacts to roundtable discussions hosted at locations throughout the district. So far, discussions have occurred in Detroit, Indianapolis and Chicago, Walstrum said. Both sides benefit, as the bank provides lunch and networking in exchange for in-depth information on business conditions that a survey can’t always provide, he said.

It’s difficult, however, to have sources who represent every aspect of the district’s diverse economy, Walstrum said. The Beige Book tends to favor sources from Chicago and Detroit more so than the rest of the region, he said, because those are the only two cities in the district with a regional or branch bank. Economists at the Chicago bank attempt to address this concern by writing about the industry they are most familiar with, Walstrum said. For example, the bank’s agricultural economist writes the paragraph about the agricultural industry.

When Lavelle and the other economists finish writing, they send their drafts to Walstrum, who spends about a day-and-a-half editing. After economists make his suggested changes, the Chicago Fed sends its section to a member of the Fed’s board of governors, the central bank’s governing body, which reviews it for publication, Walstrum said.

Preparing the Beige Book is more art than science, said Ron Wirtz, regional outreach director at the Minneapolis Fed. Content for the bank’s section has never been produced and gathered in the same way, he said, adding that it always depends on who is willing to be interviewed and who contributes insightful information.

“There’s never a point where you say, ‘I have all of the information I need to know exactly how the economy is doing.’ It doesn’t work like that,” Wirtz said. “It’s more of an assessment, not an equation.”

Wirtz is part of a two-person team at the bank who prepares the Beige Book. He splits the work down the middle with his coworker, Joe Mahon, an economist and regional outreach director.

Wirtz and Mahon start preparing the report by viewing the most up-to-date data within their industries and topical areas, which isn’t always easy, Wirtz said. Statistics aren’t often collected between each Beige Book. They have found luck through more untraditional methods of data collection, such as purchasing manager surveys or private analytics companies, Wirtz said.

After reviewing the most recent datasets, Wirtz and Mahon obtain information through a combination of surveys and interviews. They speak to about 30 people throughout the district by either phone or email for each Beige Book. The Minneapolis Fed has an expansive list of more than 1,000 people, Mahon said, most of them business executives whom he or Wirtz met while speaking at trade or professional organizations.

Wirtz and Mahon ask their sources questions about a variety of topics. Someone who works in manufacturing, for example, will be asked about prices and unemployment in addition to demand and orders.

Wirtz rarely cold-calls individuals and instead hones relationships with existing sources to build trust. Typically, the stronger the relationship, the stronger the information, Wirtz said. Mahon, on the other hand, makes a point to cold-call new contacts if it means finding someone in a hard-to-reach area, such as northern Wisconsin or South Dakota.

To seek feedback from new contacts, Wirtz and Mahon rely on surveys. The pair ask local chapters of national business associations or chambers of commerce throughout the region to distribute the surveys to their members, Wirtz said. About 50 people respond for each Beige Book, and the survey typically reaches about 130 executives or economists in the district, Wirtz said. The pair also utilize previous Fed surveys if they are timely, such as the Professional Services Business Conditions Survey, Wirtz said.

Mekael Teshome, vice president and senior regional officer of the Cleveland Fed’s Pittsburgh branch, knows how to describe the Beige Book research process. To the eight-person team who works on the Cleveland section of the report, it’s all about relationship building.

“It’s not an anonymous survey where we get a bunch of names from a book, and we have no other contact with them,” Teshome said. “We have a relationship that we cultivated and then asked them to participate to share their expertise.”

The eight-person team is comprised of economists and analysts on the regional analysis and outreach group at the main Cleveland Fed location and its two branches in Cincinnati and Pittsburgh. The team waits as close to the deadline as possible to start reporting and writing, often two weeks before the report is due, to ensure that information is fresh, Teshome said.

The Cleveland Fed primarily uses a survey for its interviewing process, asking recipients general questions about business conditions, including demand, employment and input prices, Teshome said. Questions become more specific depending upon industry. Retailers, for example, might be asked if sales numbers mirror those of the country. Manufacturers, on the other hand, are asked about the percentage of resources used for production, he said.

The survey is administered online and delivered as a link through an email, but the Cleveland economists and analysts will call contacts if they’d prefer to fill out the questionnaire orally, Teshome said. About 115 people are interviewed for each Beige Book, the majority of them business executives or managers. Eight percent of recipients prefer to take the survey by phone, Teshome said.

The Cleveland Fed finds new sources through speeches and presentations on current economic conditions to various trade and professional organizations in the communities across the district, Teshome said. The Cleveland bank’s source list is in the thousands, accumulated over time by predecessors who used to work in Teshome’s shoes, he said.

When writing the report, the team focuses on patterns and similarities among sources rather than outliers, Teshome said. The economists often cross-check with other data sources, but if a source is experiencing something different than what the data suggests, they won’t completely rule it out, as some divergence is expected, Teshome said.

When the Cleveland team finishes writing the report, it sends a draft to the board of governors. Typically, the board responds within one day, providing feedback and edits as needed, Teshome said.

Back to the main article: “Content simple, but impact significant for Fed’s Beige Book report”

Photo at top: Part of the cover page of the Beige Book, the colloquial name of a report published eight times a year by the Federal Reserve System. This cover page is from the July 18, 2018 edition.