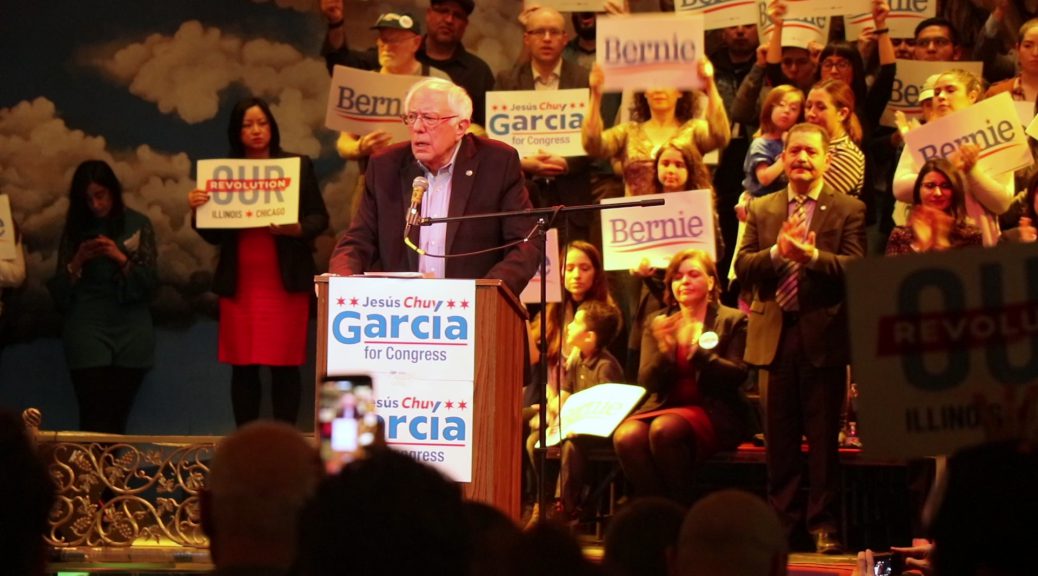 Vermont Independent Senator Bernie Sanders spoke during a rally for congressional candidate Jesús “Chuy” García at Apollos 2000 in Little Village recently. Garcia is one of  three Democratic candidates vying for Congressman Luis Gutierrez’s seat after the representative of the 4th District in Illinois announced he would not seek reelection.

“I’m not here because Chuy Garcia is a friend of mine,” said Sanders. “I am here this afternoon because we are living in a pivotal moment in American history, we need strong progressive voices in Washington and Chuy Garcia will be that voice.”

The v-shaped 4th district sweeps from the North Side southwest to I-294 and then east through several suburbs and swathes of Chicago’s South and Southeast sides.

Other speakers included Ald. Carlos Ramierz-Rosa who withdrew his bid for the congressional seat earlier this year.

“I’m here today, not as a candidate, but as a person supporting our only progressive candidate for Congress in this race at this moment,” said Rosa of Garcia.

During his speech, Rosa endorsed three other candidates running for office on Chicago’s Southeast Side: Aaron Ortiz, candidate for Illinois State Representative of the 1st District; Alma Anaya, candidate for Cook County Commissioner of the 7th District; and Beatriz Frausto-Sandoval, candidate for Judge of the 14th Judicial Subcircuit.

Photo at top: Sen. Bernie Sanders speaks to a crowd of hundreds during a rally for congressional candidate Jesús “Chuy” García at Apollos 2000 in Little Village on Feb. 22. (Elizabeth Beyer/Medill)