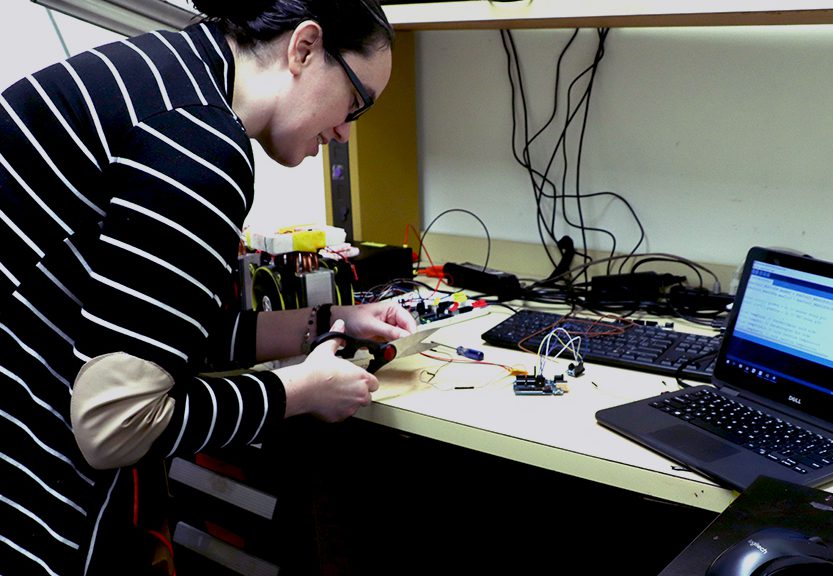 Click the first photo in the gallery above for a photo essay showing how a freeze-casting suspension is created.

Krysti Scotti’s enthusiasm for her pioneering freeze-casting work at Northwestern University is contagious enough to brighten the coldest and wettest days.

Scotti is hosting my embedded-reporting assignment at SpaceICE, where scientists in professor David Dunand’s lab are preparing to test freeze-casting — a way to manufacture materials — in a NASA satellite mission and on the International Space Station. The University of Illinois at Urbana-Champaign is building the actual CubeSat satellite for the mission.

Each day has begun about the same. I lumber into her office at Cook Hall, peel off my raincoat and shake out my umbrella. I make a comment about how the rain has been brutal. She affirms that, but soon we get to talking about her work testing various fluids and particles for freeze-casting in outer space and the intrigue seems to hasten the drying process. Scotti speaks quickly and authoritatively about freeze-casting, grinning through every explanation and laughing often.

Freeze-casting is a method used for manufacturing construction materials, battery electrodes and even food such as meat substitutes. Tiny particles are dispersed in a fluid, creating a suspension that is then frozen. Next, the frozen suspension is sublimated — evaporated so that it changes directly from a solid to a gas — and the particles left behind form a microscopically porous mold.

Scotti designs and conducts freeze-casting experiments from a lab down the hall from her office. Her first task on this Tuesday afternoon is testing the code she wrote the night before for a program intended to supply heat to one side of a microscope slide that will, eventually, contain a sample of a suspension of cupric-oxide (CuO) particles in liquid succinonitrile. Scotti and others in the lab are interested in how this type of suspension, and how freeze-casting in general, could be used in space.

Space, however, introduces a new and unwieldy variable: microgravity, which will inevitably affect the freeze-casting process in ways that researchers such as Scotti are trying to understand. As such, working in this field requires a lot of patience. Because of its novelty, many of the experiments Scotti is conducting have to be designed from scratch, meaning new code, circuit boards and specially designed microscope slides for certain types of suspensions. The studies also can be expensive: in the past, Scotti’s team has used NASA-funded parabolic flights that provide 30-second bursts of microgravity, a glimpse at how freeze-casting might work in spacelike conditions.

At the lab on Tuesday, Scotti ran into problems with her code. “I’ve found five errors so far,” she said, smiling. Then, the temperature gradient she wanted to induce along the slide, causing the suspension to freeze directionally, wouldn’t move beyond about halfway down the glass, because the glass the slide is made of isn’t very conductive.

While I mope about the rainy commute to the lab, Scotti takes setbacks such as stubborn heating elements in stride. They’re kind of par for the course, she tells me. We’ll pick back up on this project in the lab work tomorrow.

Photo at top: Graduate student Krysti Scotti rigs a microscope slide for viewing a freeze-casting suspension of cupric-oxide particles in succinonitrile. The process simulates tests she and others plan to run in space. (Lauren Robinson/MEDILL)