Twitter’s loss narrowed in the third quarter on improving ad revenue, but Wall Street was skeptical the improvement could last.

The San Francisco-based social media company posted a net loss of $131.7 million, or 20 cents per diluted share for the fiscal quarter ended Sept. 30, an improvement from the $175.5 million net loss, or 29 cents per share, in the year-ago period, and better than the $182 million loss analysts expected.

Tuesday’s  earnings release was the first since founder Jack Dorsey was appointed permanent CEO of Twitter on Oct. 5.

“We’ve simplified our roadmap and organization around a few big bets across Twitter, Periscope, and Vine that we believe represent our largest opportunities for growth,” Dorsey said in a press release.

Quarterly revenue increased 58 percent to $569.2 million from $361.3 million in the prior year, also above Wall Street expectations. 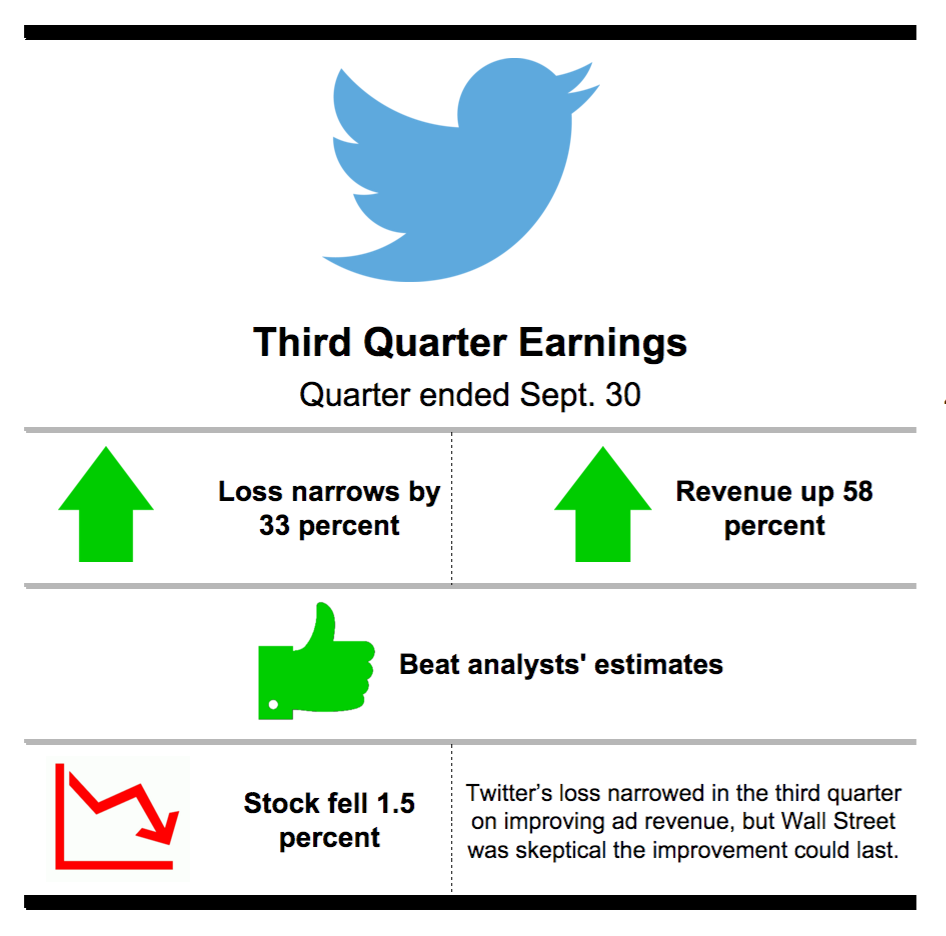 The company said it expects revenue in the fourth quarter to be between $695 million and $710 million, well below the analysts’ estimate of $742 million.

Advertising revenue helped narrow Twitter’s loss. With a focus on small business, ad revenue was $447 million, up 42 percent from the year-ago period.

The company is having success in converting many of its 9 million small businesses users into advertisers, said Anthony Noto, chief financial officer at Twitter.

The company’s initiatives seem to be working, as ad engagements grew 165 percent from a year ago, but some analysts said the opportunity for ad growth is limited.

“While we believe advertisers appreciate their ability to target Twitter users, we think the firm has limited reach and advertising inventory that would allow the company to become a ‘one-stop shop’ for digital advertising budgets,” said Morningstar analyst Rick Summer in a research note.

A major company focus is making the Twitter platform easier to understand.

At the end of the quarter, Twitter launched Moments — groups of tweets curated around topics like the MLB World Series or U.S. astronauts preparing to go into space. Users do not need to be logged in to view these updates, which are organized chronologically.

“Our focus with Moments now is making them easier to discover, getting people into them right when they open Twitter, and rolling out curation globally beyond the United States,” Dorsey said on the company’s earnings call, which was also available on its live streaming platform, Periscope.

Monthly active users rose to 320 million, compared with 316 million users in the previous quarter and up 11 percent from the year prior.

Its current total audience is estimated at over 800 million, Dorsey said, including non-registered users. Adding in sites that embed Twitter posts, that number increases to over a billion.

“Although management continues to de-emphasize Twitter’s reported monthly active user, or MAU, numbers, we remain concerned that the company is unlikely to become a mass-market social platform,” Summer said.

The company reduced expenses in areas such as research and development and sales and marketing, and plans to continue cost-cutting. It recently announced that it would be reducing its workforce by an estimated 8 percent, roughly 300 of its 4,100 employees, keeping its product engineering and design group the largest.

The company estimates restructuring costs of between $5 million and $50 million in the fourth quarter, which will impact the bottom line.