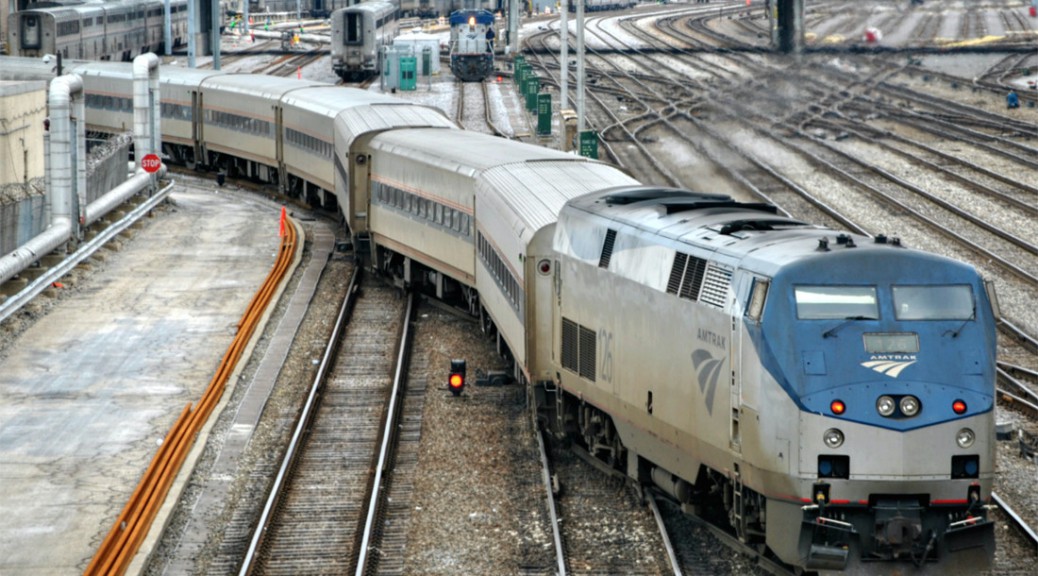 Passengers on trains at Chicago’s Union Station are being exposed to high levels of air pollution on Metra and Amtrak trains, according to the U.S. Environmental Protection Agency.

Over a two-week period in July 2015, EPA researchers used portable aerosol monitors to measure microscopic particles in the air around the train platforms and streets surrounding the station, said John Mooney, an air quality expert at the EPA in Chicago.

The particles, known as PM2.5, or particulate matter about 2.5 micrometers in diameter, are composed of liquid droplets and acids, metals, or other pollutants in the environment. PM2.5 are a byproduct of diesel-burning engines used in older trains such as the ones at  Union Station., 225 S. Canal St.

“We expected average levels to be lower. They were higher than we like to see,” Mooney said.

What EPA researchers found, especially at the south platform of  Union Station, surprised them.

“We expected average levels to be lower. They were higher than we like to see,” Mooney said.

When passengers are waiting on the platform for their trains, they inhale these PM2.5 particles. If the microscopic  particles they inhale are smaller than 2.5 micrometers in diameter, they can easily travel from the nose or mouth where they’re inhaled to the lungs according to Dr. Samuel Dorevitch of the University of Illinois at Chicago School of Public Health.

“The Union Station isn’t just an ordinary [station]. It also has diesel emissions and those Metra trains run on diesel emissions. Along with being plain old bad, the PM2.5  [are] a known human carcinogen,” he said.

He added that people who work as train mechanics or in mining  situations and who are breathing these fine particles face an increased risk of developing cancer.

So it’s not just commuters who are at risk of long-term health problems, but anyone who works around Chicago’s Union Station, he said.

Once the particles pass through the bronchial sacs into the lung cells and into the bloodstream, they can trigger an inflammatory response, which can cause cancer, he said.

EPA researchers measured not only the train platforms, but also the surrounding area using TSI SidePak Personal Aerosol Monitors. The monitors measure air quality by, “pulling air in and running a laser across the sample of air,” Mooney said. Particulate matter such as PM2.5 diffracts light in the laser beam. The more diffraction that occurs, the higher the levels of PM2.5 air pollution read by the meter.

Particulate matter such as PM2.5 diffracts light in the laser beam. The more diffraction that occurs, the higher the levels of PM2.5 air pollution read by the meter.

The monitors measured air quality from morning rush hour at 7 a.m. to evening rush hour at 5 p.m. in both one-minute and hour-long intervals at the station’s north and south platforms along with the street below.

PM2.5 levels were 23 to 96 percent higher on platforms in Union Station than on roads near the station. What’s worse, the highest levels were found on the south platform of  Union Station during both morning and evening rush hours.

After finding these elevated PM2.5 levels on the south platform, the EPA began to work with Amtrak and Metra to minimize the effects of PM2.5 on commuters,  Mooney said.

“Exposure to PM2.5 is something we try to minimize. We have a situation that needs attention,” he said.

During the past six months since the EPA published the survey, Mooney said his organization has worked with Amtrak and Metra, along with building owners around  Union Station, to find “short-term solutions.” Most of these solutions address the research that PM2.5 levels were highest closest to the engines of Amtrak and Metra trains.

Some  solutions  have included: changing the direction trains enter platforms,  making sure trains don’t idle on the platforms  and maintaining a safe distance between passengers waiting on the platforms and the train engines.

Mooney said the best solution to the air pollution problem at  the station would be long-term solutions such as changing out diesel-burning engines for cleaner, more efficient fuel-burning engines. This requires more time and more money and it hasn’t happened yet, he added.

“We all know the long-term solution is to move to cleaner engines. And there are cleaner technologies out there now, the technology has improved considerably. That solution [new engines] is going to take time,” Mooney said.

Instead, he said the EPA, Amtrak and Metra have “made the most progress” when they have worked with local building owners to determine whether the ventilation system can be improved.

“We are working closely with building owners to see if the [ventilation systems] can run longer, can run harder,” Mooney said.

“The ventilation is an important issue and it’s going to be addressed through an ongoing process through the city’s master plan. We are working with the city on the Canal Street [ventilation system] that covers all the tracks,”  he said.

Metra echoed this focus in a statement: “[We] are pleased to partner with the city of Chicago and the CTA on a long-term solution to address the air quality issues which could be solved through the master plan to reconfigure and redevelop Union Station.”

Mooney said it isn’t clear whether  progress has actually been made as another air quality study has not been performed.