Katherine Fulp-Allen has a hard time convincing people that she’s an Olympic wrestler. At 5 feet 6 inches  and 117 pounds, she blended into a group of people in front of the wrestling mat until the announcer called her name as the tournament’s most outstanding wrestler. She then stepped out in her jogging suit to receive her award.

“Everyone thinks you have to be really muscular,” Fulp-Allen said. “They look at me and say, ‘You’re not a real wrestler.’”

Though they compete in a worldwide Olympic sport, female wrestlers still face stereotypes, some of which the athletes say are rooted in ignorance of the sport and sexism.

Wrestlers gathered from around the world for the 18th Annual Dave Schultz Memorial International in Colorado Springs, Colorado. The women’s division held its competition on Jan. 30 with the Titan Mercury Wrestling Club winning the championship. Fulp-Allen won the 53 kilogram (approximately 117 pounds)  division and the Outstanding Wrestler award.

Fulp-Allen grew up in a wrestling family, with a father, Lee Allen, who competed in the 1956 and 1960 Olympics and a sister, Sara Fulp-Allen, who was a 2005 U.S. National Champion and 2008 University World Championships silver medalist. Even with such a decorated family legacy combined with her own impressive performance, Fulp-Allen, 27, from Half Moon Bay, California, said observers outside of the ring have difficulty seeing her as an Olympic freestyle wrestler because of her defined but thin frame.

Jacarra Winchester, 23, from San Leandro, California, said people also questioned her status as an Olympic wrestler because of her appearance. Though she competes at 55 kilograms (approximately 121 pounds), she said people often assume she should “be like a Sumo wrestler.”

“They say, ‘You’re too pretty to be a wrestler,’” Winchester said. 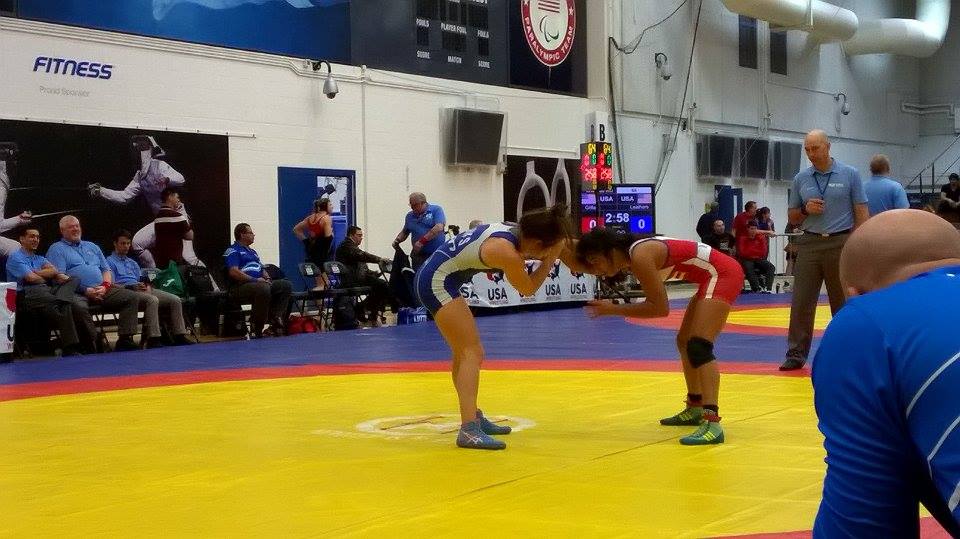 Sometimes the stereotypes directed at female wrestlers are misogynistic.  Cody Pfau, who competes at 48 kilograms(approximately 106 pounds), said she is most annoyed when people objectify her sport. She often defends women’s wrestling as an Olympic competition and not a fetish.

“People try to sexualize it,” Pfau, 20, from Parachute, Colorado, said. “They ask if it’s in bikinis or jello. No, it’s a sport. People aren’t a part of it, so they don’t understand.”

Female wrestlers also suffer the same hyper-aggressive and volatile stereotypes as female boxers. Victoria Anthony, who won the 48 kilogram division gold medal at the Pan American Championships in Mexico City in 2014, said people think her aggression on the mat spills into her personal life.

“They look at me and say, ‘Oh, I won’t mess with you,’” Anthony, 24, from Huntington Beach, California, said. “I’m a normal person. I’m not malicious at all. Most people are confused about women’s wrestling. They don’t know what it is.”

Marcie Lane Van Dusen, who coaches for the Titan Mercury Wrestling Club, said she is no longer annoyed by the questions and assumptions people have after wrestling for 23 years, coaching for 10 years, and being named the USA Wrestling Woman of the Year in 2014. But she said there is a stigma around women’s wrestling because people are naïve.

“They assume that girls aren’t as good as guys,” Van Dusen said. “They assume women can’t be strong.”

Not every female wrestler endured negative stereotypes because of her sport. Tonya Verbeek, Olympic bronze and silver medalist and current Canadian coach, said people tend to be unaware of how long women have been wrestling, but she received plenty of support in her homeland.

“There are no barriers in Canada,” Verbeek said. “I try to do my best, and that’s what you think about.”

Madison Parks, 22, from Toronto, Ontario, wrestled under Verbeek during the Dave Schultz Memorial International and said the most annoying assumption she’s experienced was someone confusing Olympic competition with the WWE, a sentiment Fulp-Allen shared.

“I think it’s not expected,” Parks said. “I don’t know about anyone treating me differently. People think it’s cool.”

“Women’s wrestling has grown tremendously in the past four years,” Wick said. “It’s rapidly growing, and I think soon it’ll be common knowledge that it’s an Olympic sport.”