By Kat Lonsdorf and Patrick Martin

KARACHI, PAKISTAN – Shanza Jamin, 23, stood in a bright yellow jumpsuit in the middle of Dolmen Mall Clifton, a multi-story trendy shopping mall on the banks of the Arabian Sea in Karachi, Pakistan. Nine other young women, all dressed in the same matching jumpsuit, gathered around her, sitting or standing next to a temporary catwalk taking selfies and fixing lipstick and stray hairs.

Women in burqas and the traditional shalwar kameez (an outfit consisting of loose pants and tunic) rode the nearby escalator past bold signs with the yellow logo of Caterpillar (CAT), the Illinois-based heavy equipment company, the slogan underneath encouraging shoppers to “Make a Scene.” Overhead, the azan—the Muslim call to prayer—blasted from the mall speakers.

No one changed what they were doing.

“As soon as the azan is over, we’re going to take pictures,” Jamin said, pointing to a lit-up photo backdrop off to the side, covered in CAT logos.

The whole scene was set to celebrate the Pakistani launch of CAT apparel, a fashion line that promotes a lifestyle as well as the brand. Made up of jeans and flannel button-ups, cotton t-shirts and zip-up hoodies, the menswear is about as traditionally American as apple pie.

Ironically on the same day back in America, Caterpillar announced plans to close five plants and eliminate about 670 jobs. Likely a response to slumping manufacturing sales, the action continued a restructuring trend in the company. Caterpillar has experienced over three years of declining sales as of January, as the mining, forestry, and construction sectors have taken serious economic hits worldwide.

But for Jamin and the other young women in jumpsuits–all textile design students at Indus Valley School of Art and Architecture–Caterpillar’s financial woes weren’t the focus. As ushers for the show, they were there to learn how to launch a new clothing brand.

“Nowadays we see a lot of change in the trends in fashion for men and women here,” said Jamin, a fourth-year student who hopes to have her own line of apparel someday. “Although some people do prefer wearing Eastern (styles), in the newer generation people wear jeans for their work or the university.”

Once the azan finished, it was replaced by thumping American pop music—a soundtrack to the flashy CAT promotional video that started playing above the stage. Scenes of industrial Detroit and sunny Denver flashed across the screen with Caucasian hipster models in short skirts and CAT v-necks strutting through the fray.

“The people of Pakistan like bright things—and they like tough, rough things,” said Haider Ali Khan, operations manager of Production 021, the Karachi promotion company that conducted the fashion show. 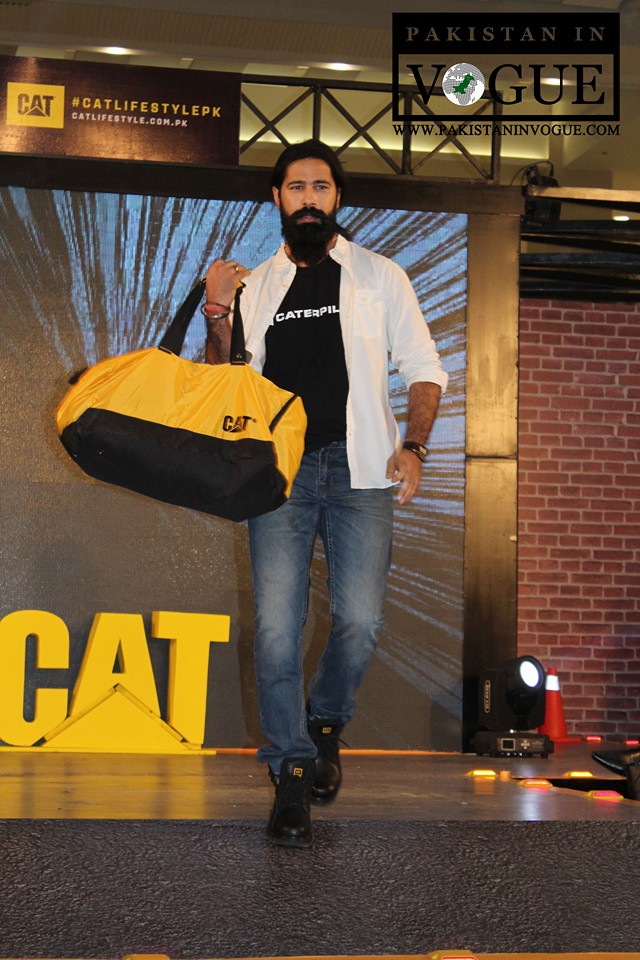 CAT footwear—tough leather work boots with thick soles and no-nonsense laces–has been sold in Pakistan for over a decade, but the apparel is new and in stark contrast to the loose, flowing traditional outfits that men sport on even the most cosmopolitan streets in Karachi.

“A lot of people think that we are those cranes–a rugged construction brand–and that’s not the image we’re trying to portray.  We’re actually promoting a much more casual, ready-to-wear, daily-wear clothing,” said Aazer Durrani, manager of the Caterpillar store in Karachi.

But Durrani doesn’t work for CAT, and the products in his store aren’t made by the equipment manufacturer.

Durrani and the other employees at the CAT store work for the Lahore-based Umer Group of Companies, the authorized distributor of Caterpillar footwear and apparel in Pakistan. They purchase their inventory from two companies licensed by Caterpillar.

Boots and shoes bearing the CAT logo are produced by Wolverine Worldwide, a Michigan-based company that also produces Harley-Davidson boots and Saucony shoes among other footwear products.

Caterpillar lifestyle clothing is produced by SRI Apparel, which has headquarters in Dublin, Ireland and Bozeman, Montana. Caterpillar works with its licensees to maintain quality control of the disparate products bearing their name and logo.

According to Caterpillar, its consumer merchandise is sold at 10,000 outlets in 150 countries.

“Caterpillar corporate is very involved in the apparel sales and promotions such as the one in Pakistan….Each product design, promotion and advertisement is approved by the CAT licensing team largely based in Peoria,” Kenny Beaupre, the marketing manager at Caterpillar, said in an email.

Beaupre outlined his ideal image of Caterpillar apparel internationally: “CAT apparel is made for the leader, the innovator, the visionary; it is meant to work, relax and play in….The CAT collection equips you for life—equips you to conquer your fears, achieve your goals and aspire for more.”

Photo at top: Chairs and hard hats are set up for spectators at the CAT Apparel fashion show in Karachi, Pakistan, Jan. 29, 2016 (Kat Lonsdorf/MEDILL).