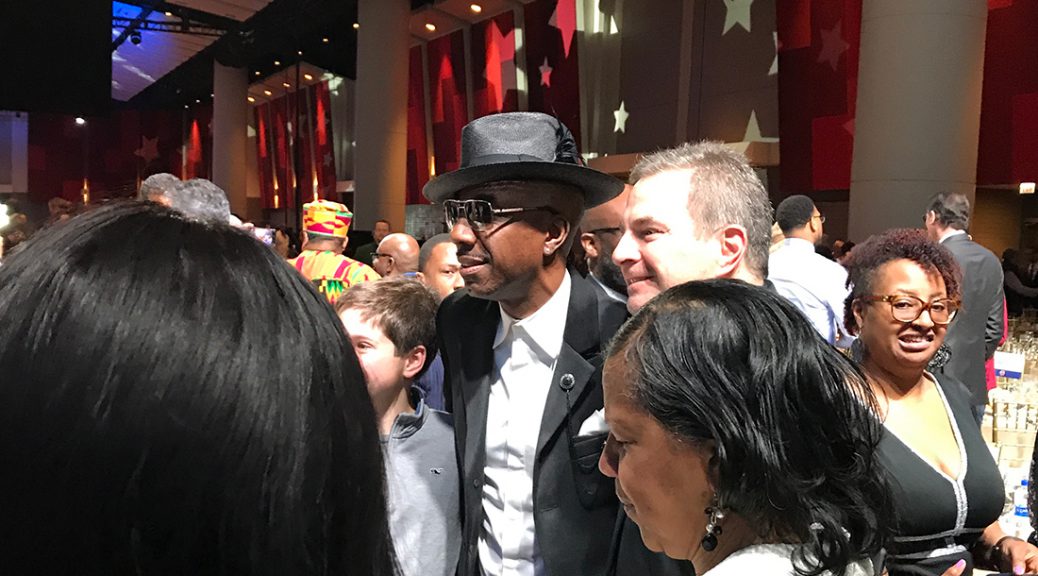 You can learn a lot about J.B. Smoove from watching him portray Leon Black on “Curb Your Enthusiasm,” the hit HBO comedy series he stars in alongside Larry David. Both Smoove and the fictional Leon share the same high energy, quick-witted, and simply hilarious personality. Both are incredibly engaging and command the attention of any room they enter. Both have unique (albeit in very different ways) fashion senses. But what you might not be able to glean from watching Smoove perform is his deep burning love for the game of basketball.

Smoove, whose real name is Jerry Angelo Brooks, started his relationship with basketball in the Levister Towers housing projects of New York suburb Mount Vernon when he was just 3 years old, shooting on flimsy hoops he and his brother fashioned out of wire hangers.

These days, Smoove’s personality and his passion for the game have made him a recurring character in the NBA universe, particularly during the league’s annual All-Star Weekend festivities. After making an impression for several years as one of the more vocal and animated of the many celebrity attendees of All-Star Weekend, Smoove got his chance to step onto the court during the 2019 Celebrity All-Star Game in Charlotte, North Carolina.

Smoove was even more prevalent during the 2020 All-Star Weekend in Chicago, talking basketball with Shaquille O’Neal, Charles Barkley, Kenny Smith and Ernie Johnson on TNT’s “Inside the NBA,” and cracking jokes at the same program’s first ever NBA All-Star Roast. Though not a participant, Smoove was courtside for this year’s Celebrity Game and attended several other All-Star events, always dressed to the nines in a fresh suit, overcoat, and of course his signature sunglasses and black fedora.

END_OF_DOCUMENT_TOKEN_TO_BE_REPLACED 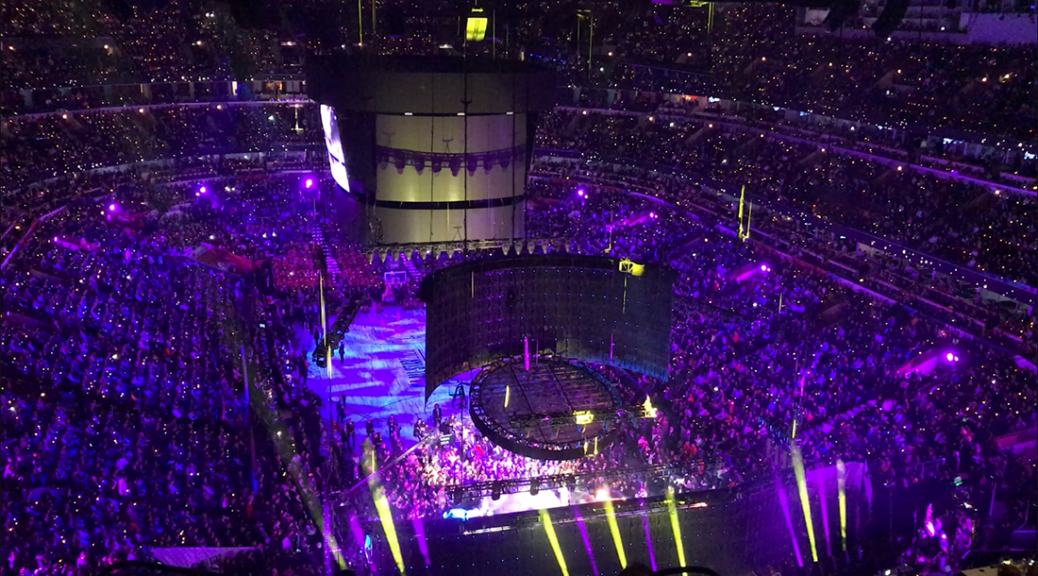 Every event of the 2020 NBA All-Star weekend was blanketed with melancholy air. Seemingly every show, contest and person associated with basketball’s most star-studded weekend paid homage to the late Kobe Bryant, as well as his daughter Gianna.

“It’s still very fresh in people’s minds and in people’s hearts, so he definitely has a big presence here,” said first-time All-Star Jayson Tatum, who idolized Bryant and had been training with him in recent years. “There’s so many Kobe jerseys here and tributes, as there should be.”

On January 26, the heartbreaking news that Kobe, 13-year-old Gigi, and seven others died in a helicopter crash sent people all over the planet into shock and mourning. Just three weeks later, the basketball world gathered in Chicago to compete on a stage where Bryant had long shined brightest: the NBA All-Star weekend.

Even though the Lakers legend is no longer here, there was no question that this weekend was all about Kobe. His larger-than-life presence inspired countless tributes and invoked the sharing of memories and stories about him throughout the weekend.

END_OF_DOCUMENT_TOKEN_TO_BE_REPLACED 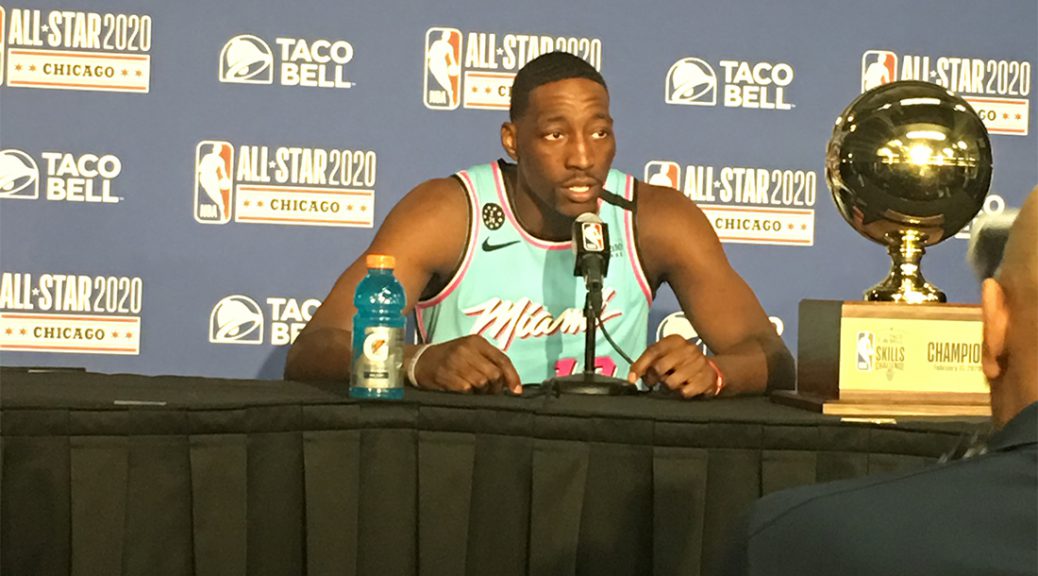 Jimmy Butler may be in a little bit of debt following Bam Adebayo’s three point shooting at the NBA’s skills challenge.

“That’s $1,500, so I’ll be expecting my check in the mail,” Adebayo said. The money Adebayo is referring to stems from a bet he and his Miami Heat teammate Butler placed earlier this season, with Butler fining Adebayo $500 for every game Adebayo doesn’t attempt a three point shot.

Adebayo was the first to sink the concluding three-pointer in each of his three rounds during the Skills Challenge on All-Star Saturday night, and afterward he let the public know about the ever-evolving role of the modern big man.

“It just shows where this league is going,” said Adebayo. “It’s scary because, when you got guys that are 6’10”, classified as centers or power forwards, I don’t believe it’s any of that anymore.”

END_OF_DOCUMENT_TOKEN_TO_BE_REPLACED 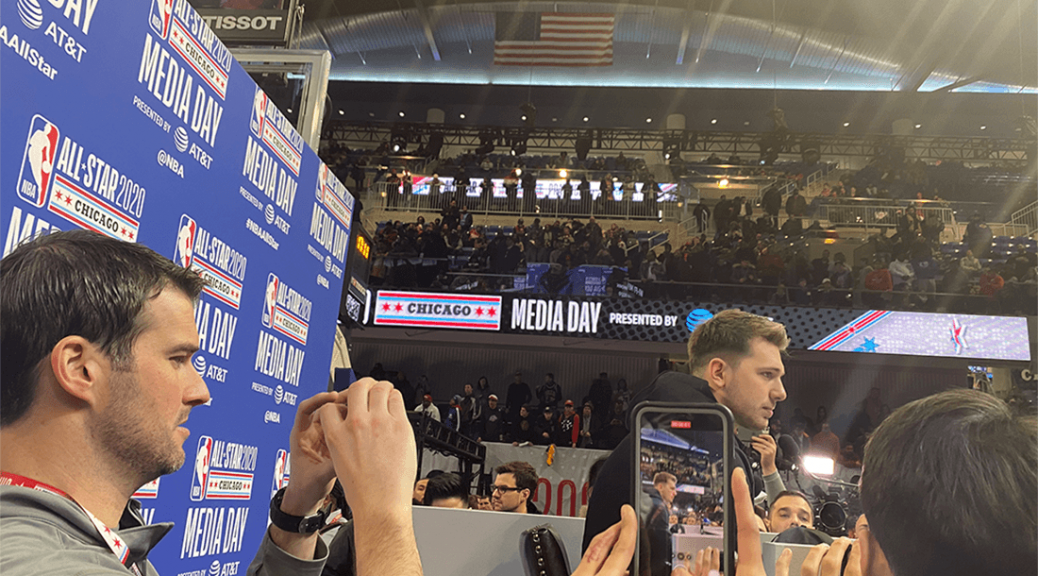 Whether Luka Doncic was behind the podium at the Rising Stars Media Day, All-Star Media Day or after the actual games, one man stood by his side as if his life depended on it.

Scott Tomlin is the Director of Basketball Communications for the Dallas Mavericks. Anytime Doncic, the second-year Mavericks star, spoke with the media during All-Star weekend, Tomlin  was never too far away, and listened closely to ensure no conversation went in a direction that could tarnish the team’s or his young superstar’s reputation.

“He’s always with me,” Doncic said. “He’s a great guy, and always takes care of me. There’s a lot of media.”

END_OF_DOCUMENT_TOKEN_TO_BE_REPLACED 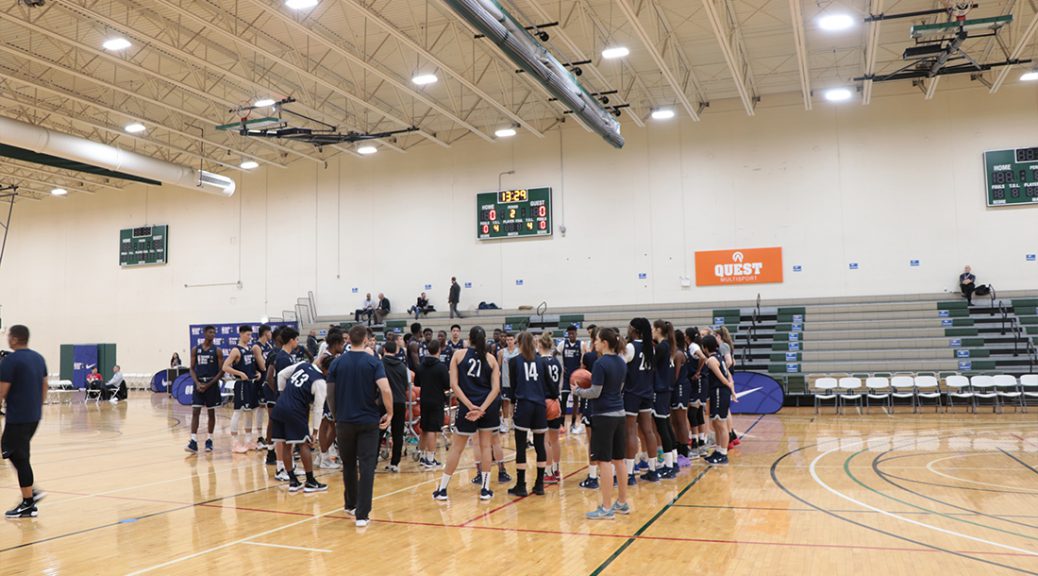 Camp of any kind feels like a summer activity. But during our brisk Chicago February, as part of the 69th annual 2020 All-Star Game in Chicago, a Basketball Without Borders Global Camp showcased the talent of the next generation of basketball players.

“What these young athletes are doing is beyond impressive,” said Chris Ebersole who coordinates the Basketball Without Borders camps throughout the world. The camps are in various locations around the world and in recent years have brought the came to the All-Star Weekend.

Campers from more than 34 countries came to Chicago Thursday for three full days to learn basketball from professional coaches and former players. Sixty-four athletes from the different countries had to overcome language barriers, playing styles and cultural differences but had fun playing in front of NBA Scouts throughout the weekend. Basketball Without Borders selected the high school-aged players and sponsored their trips to Chicago. END_OF_DOCUMENT_TOKEN_TO_BE_REPLACED

The much-anticipated debut of the new NBA All-Star game format was a hit, as  Team LeBron beat Team Giannis, 157-155, in what turned out to be a very competitive and highly skilled basketball game.

All-Star games are typically high-scoring affairs with little stakes, but with the new format — in which each of the first three quarters was a separate contest to win six-figure checks for charity and the final period was an untimed race to a designated target score — the ending felt like a playoff game. Team Giannas led Team LeBron 133-124 heading into the final period. The target score to win the 69th All-Star game was set at 157, by adding 24 points to the leading team’s score in honor of the jersey number the late Kobe Bryant wore in the second half of his career. The fourth period quickly turned from friendly to fierce.

END_OF_DOCUMENT_TOKEN_TO_BE_REPLACED 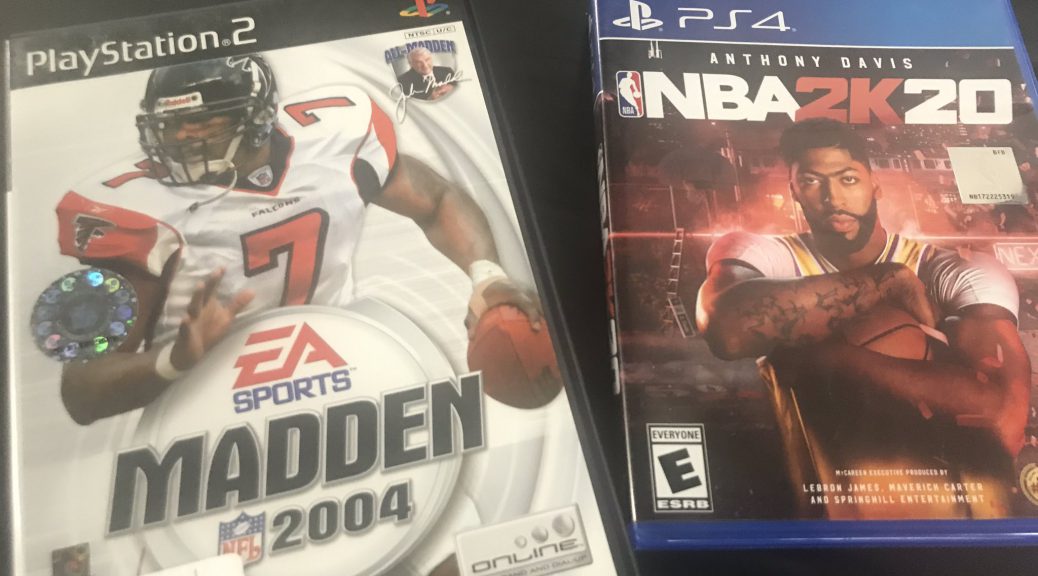 The mere sight of it took NBA players gathered for All-Star Weekend to a simpler time. The timeless, slick white box contained Madden 2004, a video game with a legacy that speaks for itself.

“It’s one of the best video games of all time,” Orlando Magic forward Aaron Gordon declared.

Gracing the cover of Madden 2004 is then-Atlanta Falcons quarterback Michael Vick, one of the most dynamic dual-threat quarterbacks the NFL has ever seen. HIs digital avatar in the game is a force that’s virtually unmatched throughout the sports gaming world.

END_OF_DOCUMENT_TOKEN_TO_BE_REPLACED 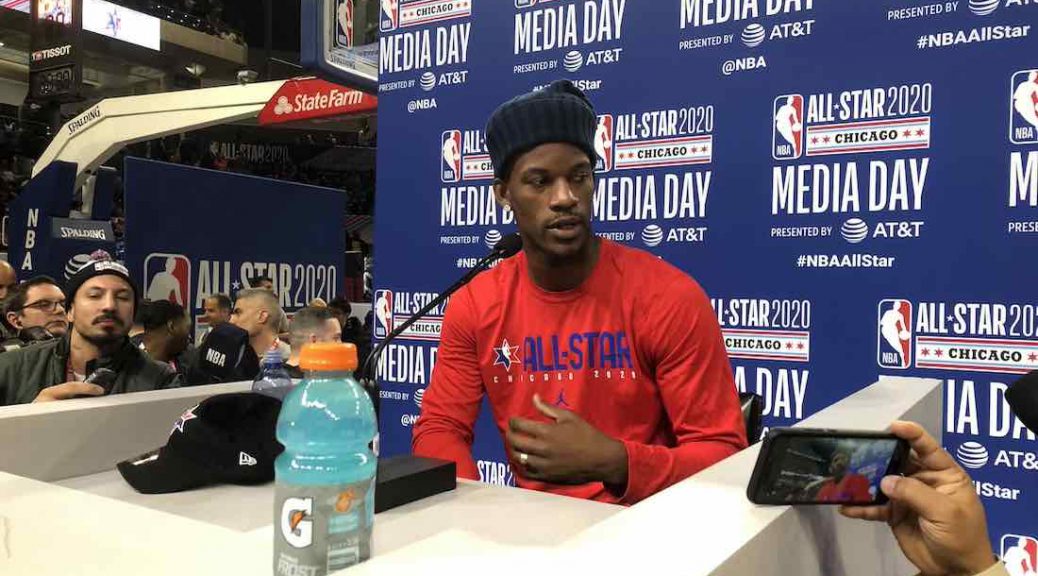 For Jimmy Butler, moving on has become pretty common in his NBA career.  Butler has packed bags and said goodbyes three times already, moving on from the Bulls to the Timberwolves to the Philadelphia 76ers. One goodbye he will never say is to the city that embraced him from Day One: Chicago, Illinois.

Butler was the last pick of the first round in the 2011 draft by the Chicago Bulls. He spent six seasons there before his eventual exit, giving Bulls fans memorable moments on the court. What was even more impressive was the work Butler was doing off the court around the city of Chicago.

END_OF_DOCUMENT_TOKEN_TO_BE_REPLACED 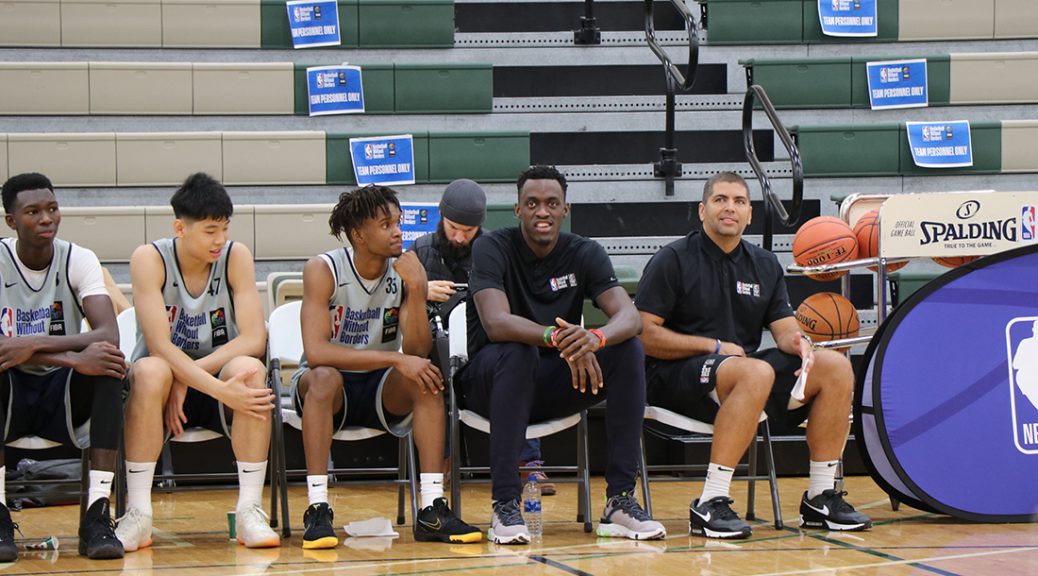 Walking into the Basketball Without Boarders Global Camp, comprised of young men and women from over 30 different countries, it would be easy to assume that there could be many language barriers to overcome. However, with the booming noise of basketballs bouncing throughout the gymnasium, the squeaking sound of sneakers across the hardwood, or the thunderous celebration after a dunk gets thrown down, it becomes clear that the only language necessary for the weekend is the language of basketball.

Basketball Without Borders, which is organized by the NBA and the International Basketball Federation (FIBA), held its sixth annual Global Camp during the All-Star weekend festivities from Friday to Sunday at Quest Multisport gymnasium on Chicago’s West Side. The camp invites the top 64 high school basketball players (32 boys and 32 girls) from all around the world to participate in the now All-Star weekend staple, giving them a chance to make new friends from across the globe, show off their skills to professional scouts, and learn from professional players and coaches.

END_OF_DOCUMENT_TOKEN_TO_BE_REPLACED 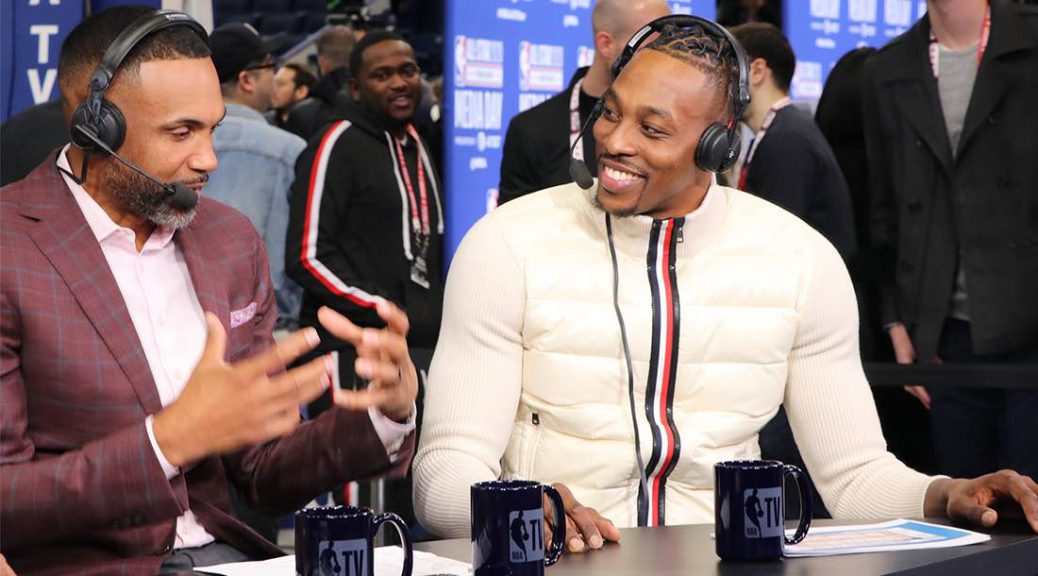 There is another reality, someplace in the immense universe of life’s uncertainties, where Dwight Howard threw down a dunk with Kobe Bryant’s help on All-Star Saturday Night.

Where Bryant was courtside at the United Center, with daughter Gigi alongside. Where he was pulled into the spotlight by Howard, to help with his dominating dunk soaring from the free-throw line.

Afterward, there is reality, which Howard and the NBA community, has been compelled to deal with the passing of a legend. What’s more, after grieving, to celebrate.