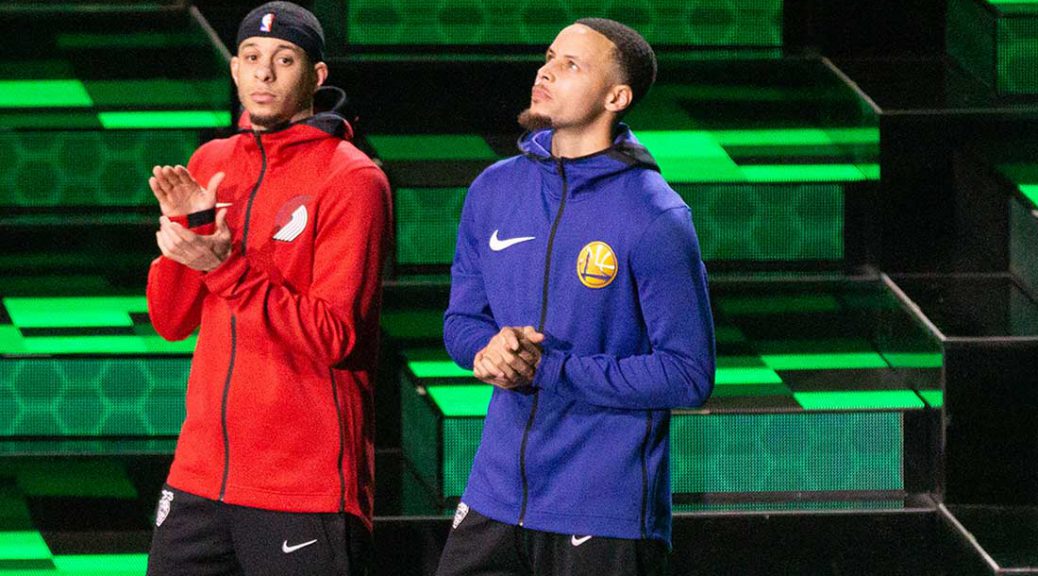 CHARLOTTE, N.C. –In order to fully understand the bond between Stephen Curry and Charlotte that’s been on display this week you had to be in Memphis the night of April 9, 2016, to see a connection forged through faith, family and basketball at the Charlotte Christian School.

The Golden State Warriors had defeated the Memphis Grizzlies for their 71st victory of the season, putting them within one of the NBA record set by the 1995-96 Chicago Bulls. They were about to fly to San Antonio to face the Spurs the next night. After 45 minutes of postgame interviews, Curry strolled toward the tunnel in FedEx Forum and pointed out a visiting friend in the crowd of remaining stragglers in the arena.

“Take your time,” a Warriors team official told Curry. “Just know the plane is waiting for you to leave.”
END_OF_DOCUMENT_TOKEN_TO_BE_REPLACED 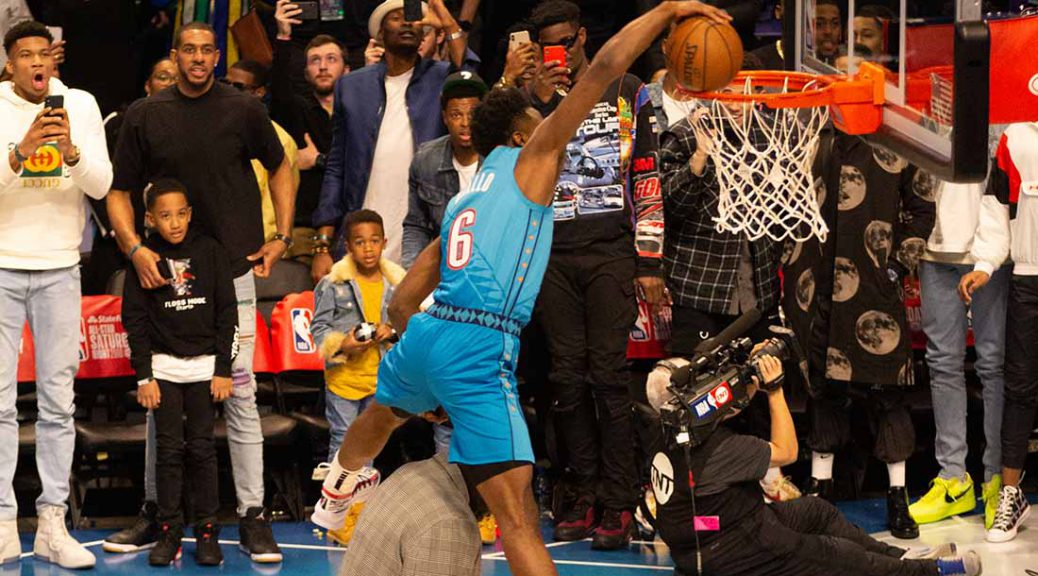 CHARLOTTE, N.C. — He flew over Shaq like Nate Robinson did with Dwight Howard. He dunked and then dangled on the rim by his forearm like Vince Carter. And he tore open his jersey to reveal a Superman shirt like Cam Newton.

On a night where creativity, culture and controversy collided, Oklahoma City Thunder rookie Hamidou Diallo stole the show and then slipped away with a dunk contest victory on All-Star Saturday night.
END_OF_DOCUMENT_TOKEN_TO_BE_REPLACED 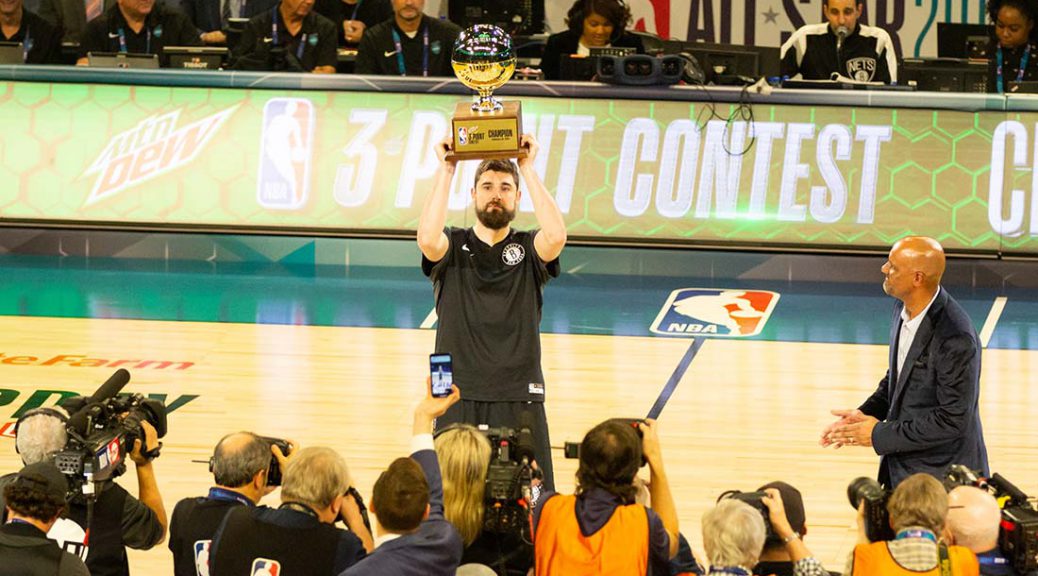 CHARLOTTE, N.C. — In not only the first three-point competition of his NBA career, but of his life, Nets guard Joe Harris defeated two-time league MVP Stephen Curry in the final round to win the 2019 event.

Curry, the 2015 champion, was supposed to win the shootout as part of the weeklong celebration of the return to his hometown. But Harris either didn’t get the memo or simply didn’t care. And if not Steph, it should have been defending shootout champion Devin Booker, Hornets All-Star Kemba Walker or Steph’s younger brother, Trail Blazers guard Seth Curry, also a Charlotte native. All three failed to advance to the contest finals, tallying 23, 15 and 16 first-round points, respectively.
END_OF_DOCUMENT_TOKEN_TO_BE_REPLACED 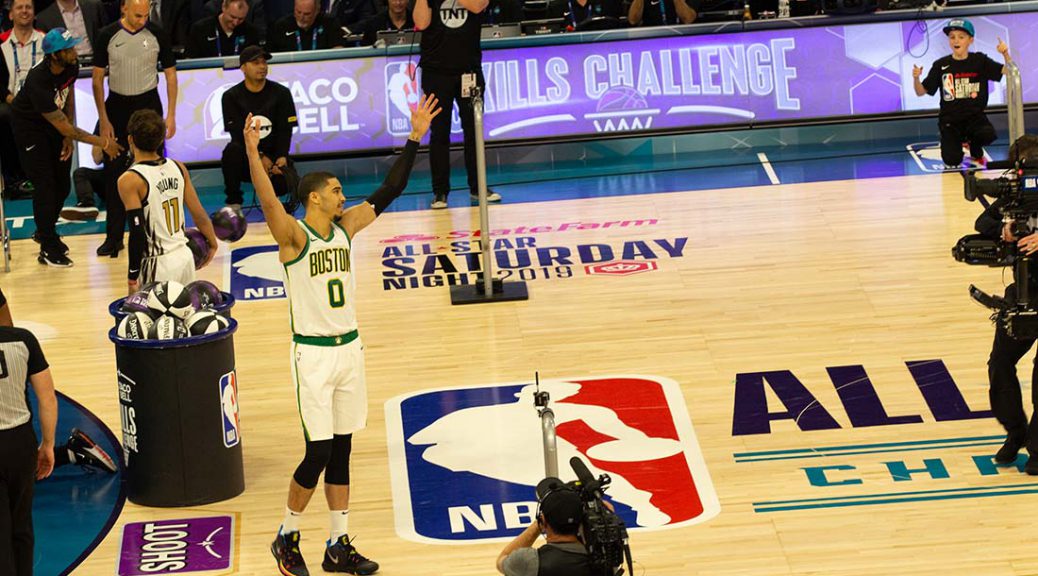 “I didn’t want to give Trae a chance,” Tatum said. “I honestly didn’t know I was going to hit the shot, but I had to give myself a chance, throw it up there, and it worked out for the best.”
END_OF_DOCUMENT_TOKEN_TO_BE_REPLACED 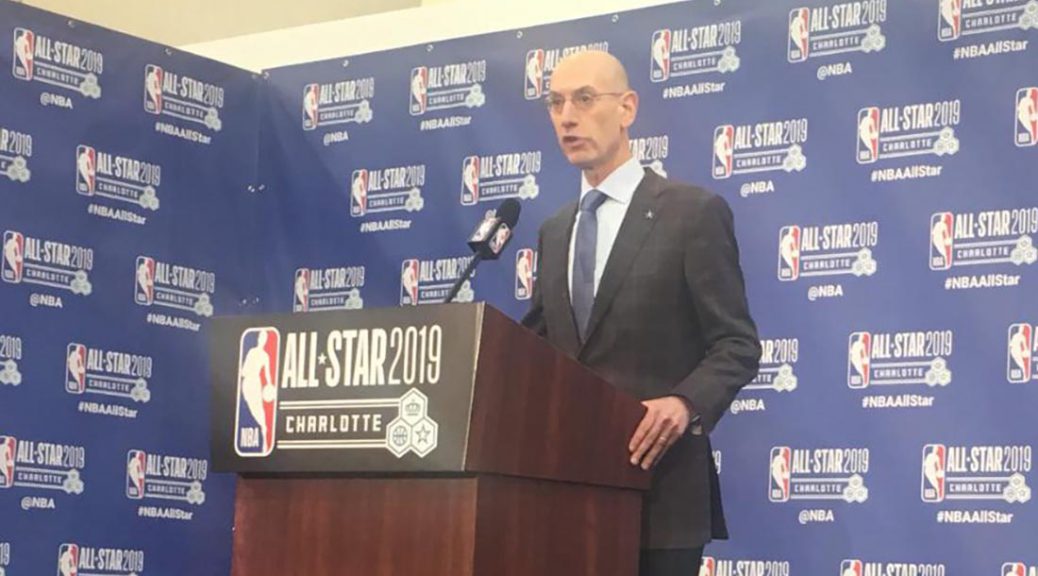 CHARLOTTE, N.C. — The elephant in the room during All-Star weekend was the “bumps in the road” NBA Commissioner Adam Silver acknowledged during his annual news conference: North Carolina’s recent history regarding LGBTQ rights and its impact on staging the event.

The heart of Silver’s opening statement detailed what it took for the NBA to feel comfortable hosting its showcase event in Charlotte two years after it was originally scheduled to be here. After Charlotte had been awarded the 2017 All-Star game, the North Carolina state legislature passed a bill known as HB2, which, among other things, required that citizens go to the bathroom of their assigned birth sex. The legislation created a sense of panic in the LGBTQ community and in 2016 the NBA switched the site of the 2017 All-Star game to New Orleans. The so-called “Bathroom Bill” was eventually repealed, thanks in part to the pressure put on North Carolina by corporate entities like the NBA, NCAA, and PayPal. Silver credited the efforts of Charlotte Hornets owner Michael Jordan and team president Fred Whitfield as well.
END_OF_DOCUMENT_TOKEN_TO_BE_REPLACED 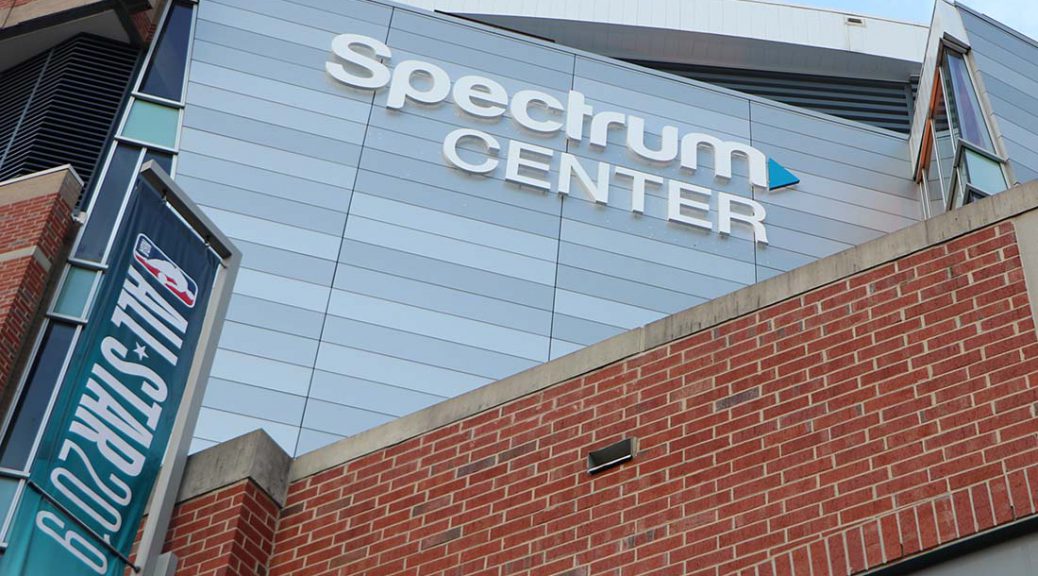 CHARLOTTE, N.C.– The NBA and hip-hop are two streets that have formed an intersection as the league has become more accepting of the hip-hop community.

The two have become intertwined, especially during All-Star Weekend, as rappers, performing artists and other celebrities flock to arguably the biggest sporting event of the year.

As J Cole and Meek Mill are slated to perform on Sunday night at halftime of the 2019 NBA All-Star game, here’s a look at some of the players’ selection of ‘go-to’ songs for their pre-game warmups and this weekend’s events.
END_OF_DOCUMENT_TOKEN_TO_BE_REPLACED 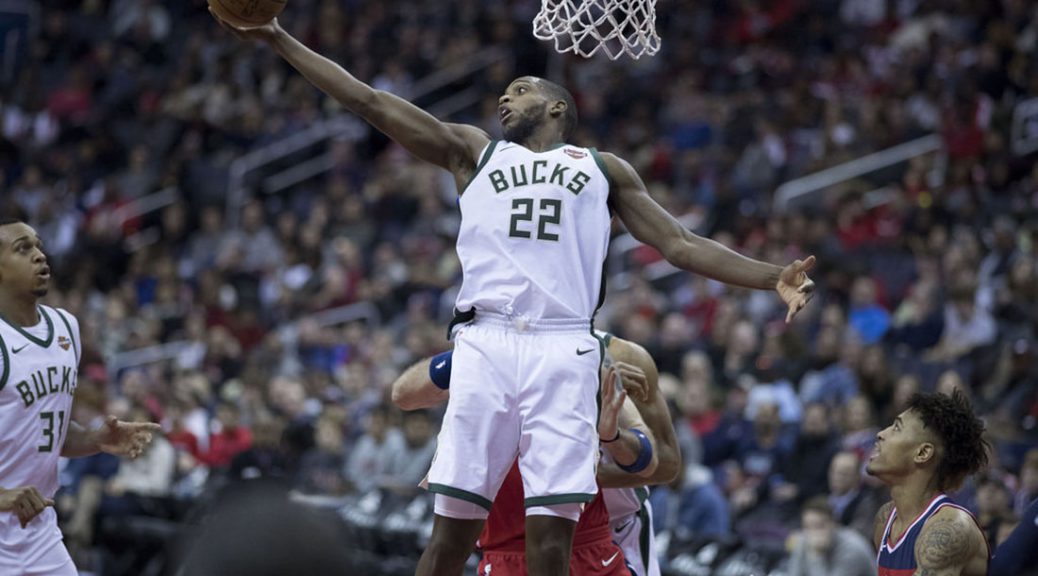 CHARLOTTE, N.C.– Beneath the surface of the NBA is an emerging pipeline, a new route for the game’s next wave of star players.

The G League is no longer a mystery, nor is it the cellar for basketball in America.

“It’s not deemed as a punishment,” said Darvin Ham, who spent over five years in the developmental league as a player and coach. “You’re actually going down there to play. It puts players in a different light.”

It has been a landmark year for the G League — and the 2019 NBA All-Star weekend in Charlotte has amplified that notion even further.
END_OF_DOCUMENT_TOKEN_TO_BE_REPLACED 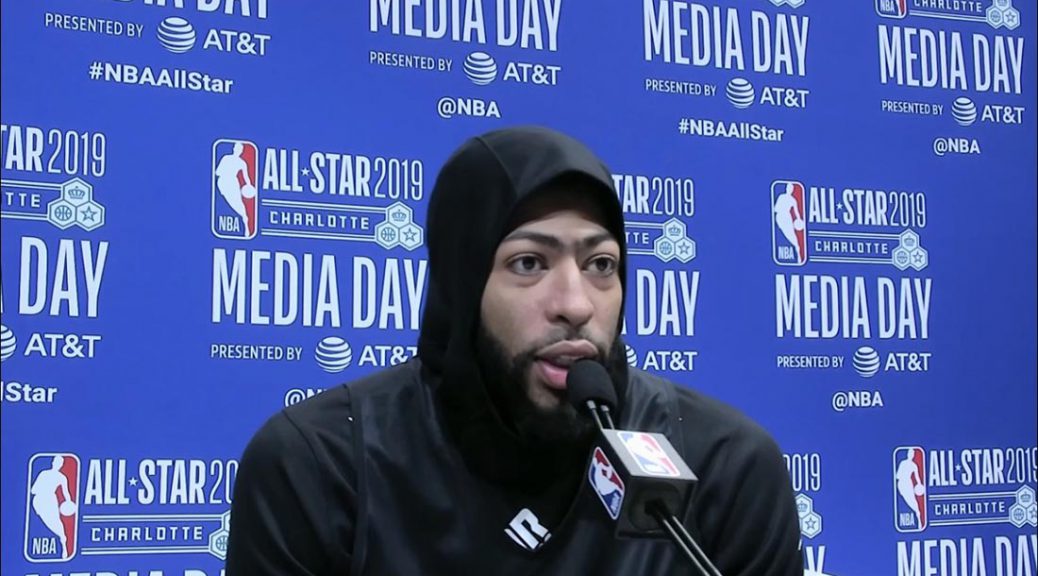 CHARLOTTE, N.C.– Anthony Davis, a current member of the New Orleans Pelicans, mostly fielded questions regarding what team he’d play for in the future at All-Star media day on Saturday.

Celtics fans rejoiced when Davis said that Boston was on his list.

“They were never not on my list,” Davis said.

Davis later said that all 29 other cities were on his list, but most NBA teams know better than to think they have a chance in the sweepstakes. Either they can’t keep him long term, or they know that they don’t have the trade pieces to acquire him before he becomes a free agent.
END_OF_DOCUMENT_TOKEN_TO_BE_REPLACED 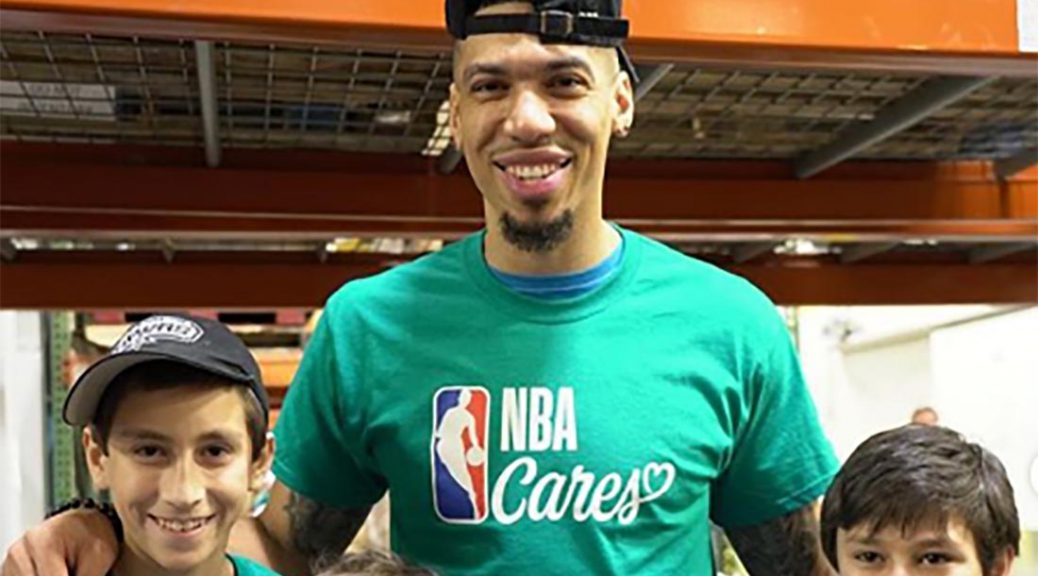 Hopeful hearts and good intentions catalyzed the production lines at Second Harvest Foodbank of Metrolina Friday afternoon in Charlotte, as current NBA players and legends filed into the building throughout the day– joining the ranks of volunteers and Second Harvest staff for the NBA’s annual Day of Service.

Green was easily the biggest figure at his station, but it was his heart and effort that commanded the space, rather than his stature.
END_OF_DOCUMENT_TOKEN_TO_BE_REPLACED 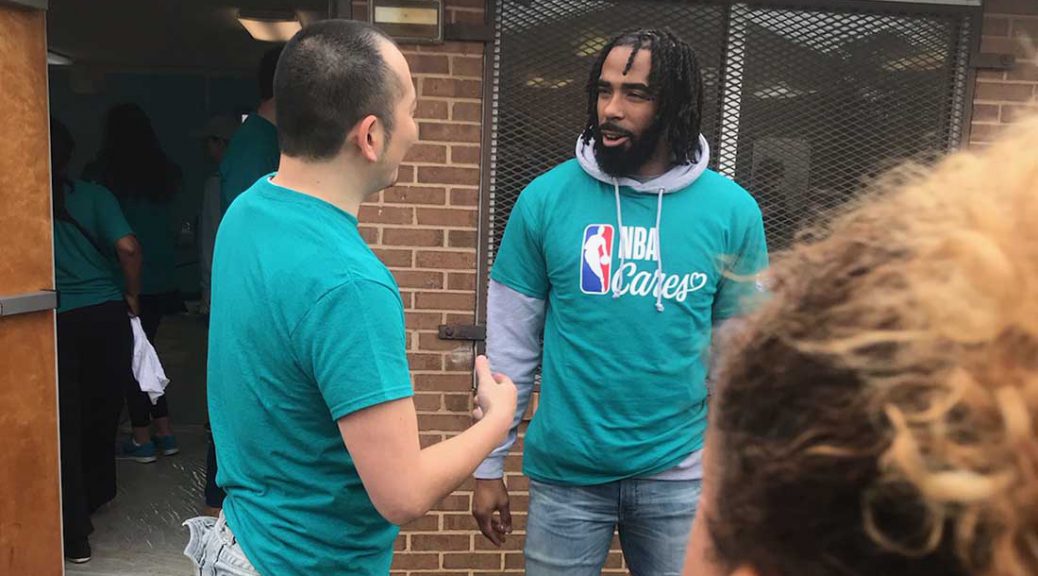 CHARLOTTE, N.C. — Finally past the other side of the trade deadline, Memphis Grizzlies star point-guard Mike Conley was happy to be assisting with the community service project in West Charlotte.

On the Friday of All-Star weekend, NBA legends past and present collaborated with dozens of NBA Cares volunteers to refurbish homes in the West Charlotte area. In addition to Conley, Klay Thompson, Miles Bridges, Buddy Hield, Reggie Bullock, Jason Collins, and others gathered at the Little Rock Apartments, partnering with United Way to help with restoration, as well as executing a food drive at the South View Recreation Center nearby.
END_OF_DOCUMENT_TOKEN_TO_BE_REPLACED