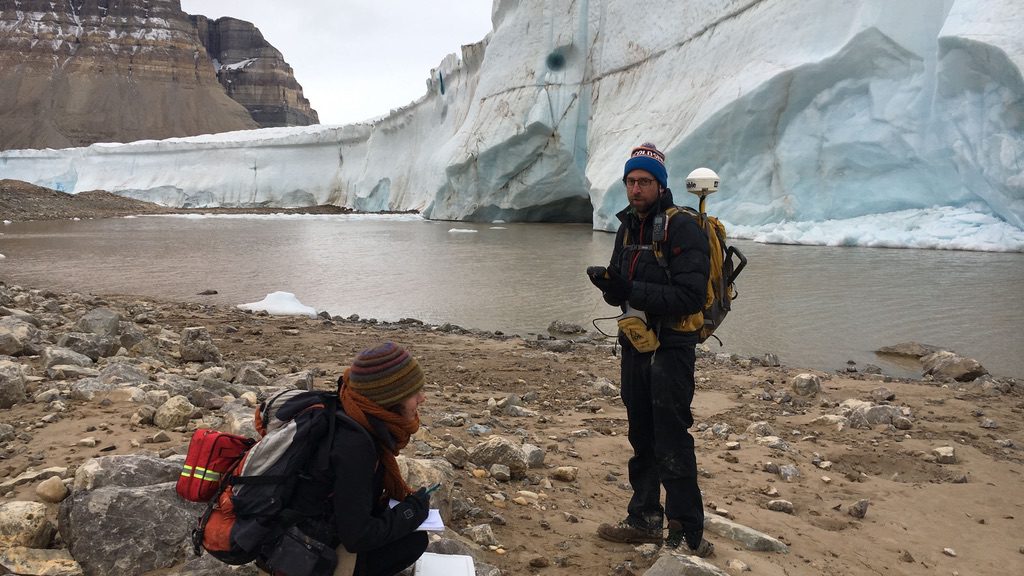 A 30-mile-long strip of sea ice in northwest Greenland, once thought to be a permanent structure, didn’t exist until 2,000 years ago, according to newly published research from researchers at Oregon State University. The findings suggest that some of the Arctic may melt more quickly in today’s warming climate than previously expected.

The sea ice, known as the Petermann ice tongue, stretches across a narrow valley where the large Petermann Glacier meets the Arctic Ocean. The ice tongue captured media attention in 2010 and 2012 when enormous icebergs, each many times larger than Manhattan Island, broke off into the ocean. New fractures spotted this year threaten to shrink the ice tongue to its smallest size in modern history.

A research group, led by Oregon State post-doctoral researcher Brendan Reilly, sought to understand the modern behavior of the ice tongue by examining its past. They joined dozens of other scientists in 2015 on an expedition to the Petermann Glacier.

“We were really interested in understanding the geologic history of the Petermann ice tongue on timescales much longer than we can observe using historical record or satellite data,” said Reilly, who studies paleoclimatology.

He and his team took samples of the seabed below the ice, extracting 2-foot-long sediment cores of sand, shells and other debris.

By analyzing the cores, they documented the last 7,000 years of the valley’s past and found that the ice tongue was missing until about 2,000 years ago. The ice tongue grew to its modern size only in the last few centuries.

“This was a really surprising finding, at least for me,” he said. “I was expecting to go out there and find history for a very stable system. It’s showing something kind of weird now.”

The Arctic temperatures during its absence were roughly the same as they are today, Reilly said, implying the ice tongue may soon disappear once again. If broken up, the tongue may also cause a rise in sea level by destabilizing the Petermann Glacier.

“Losing the ice tongue will increase the amount of (meltwater) that’s coming out of that system, so that’ll be the contribution to sea level rise,” Reilly said.

The contribution wouldn’t be from the ice tongue itself — it is floating in the Arctic Ocean and wouldn’t change sea levels if melted, for the same reason why a full glass of water with ice cubes will never overflow.

The sea level threat instead comes from the rest of the Petermann Glacier, which sits on Greenland and will spill water into the ocean more quickly without a large ice tongue present. The glacier holds enough water to raise global sea level by 1.5 feet, Reilly said.

The new research contributes to scientists’ understanding of modern ice sheets and how they may change in the future, said Sidney Hemming, an associate professor of geochemistry at Columbia University.

She also compliments the innovative techniques Reilly and his team used in analyzing the sediment cores. By sorting and testing different-sized grains, Hemming said, they can glean more information about ice shelves as they existed thousands of years ago.

“By studying this in detail, they’re tackling those questions,” Hemming said. “I think it’s a pretty powerful strategy that they’re taking.”

Reilly and his team returned to northern Greenland this summer to study the nearby Ryder Glacier, which has its own ice tongue but may respond differently to a warming climate. Their research on both glaciers, Reilly said, “can be applied to understanding the future of North Greenland.”