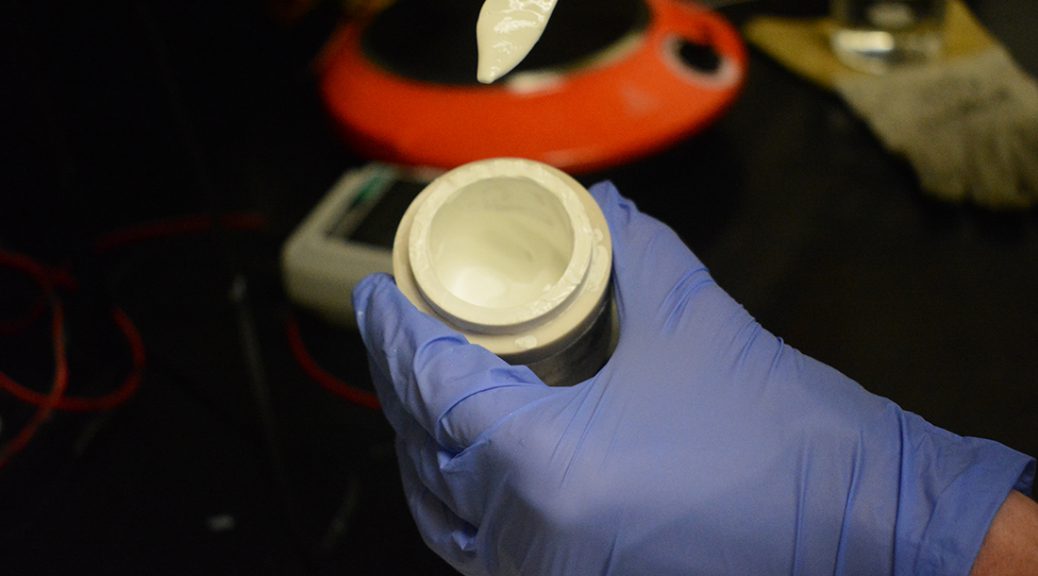 This summer a team of Northwestern University undergraduates will finalize instrumentation designs for a NASA satellite mission that will test the manufacturing of materials while in orbit.  The students are building the device for SpaceICE to study freeze-casting, a process that could eventually be used to build materials on other planets in space colonies.

“In terms of science fiction, the perfect use [of freeze-casting] would be to use soil on Mars and on the moon” to make bricks or other necessities. “We hope we will impact the creation of the first space habitats from planetary sources,” said materials science Professor David Dunand, the lead advisor for the SpaceICE project.

Northwestern undergraduates will test freeze-casting for the extraterrestrial fabrication of materials in space. Freeze-casting starts with making solutions that must remain evenly mixed in orbit at zero gravity.

But building a grocery store on Mars would be a huge upscale. Right now, the intricate process of freeze-casting is still at an experimental stage. Researchers area creating materials by suspending particles in fluid, freezing the whole batch and then evaporating off (sublimating) the frozen fluid. The process leaves behind a microscopically porous material in the once-suspended solution.

It seems especially challenging to extrapolate the process to building as you witness the series of intricate steps required to freeze-cast and analyze just a miniscule sample. At the same time, witnessing the process in miniature makes freeze-casting seem all the more amazing.

The NASA-sponsored undergraduate-only mission will allow the SpaceICE team to test the process in zero gravity in a satellite that another undergraduate student group is building at the University of Illinois at Urbana-Champaign.

Freeze-casting’s origins go back to 1954, when NASA mixed some particles with water and froze the suspension in a freezer. They removed the ice and put the particles in a very hot oven to bond them all together. The process was then largely forgotten.

But in the early 2000s, researchers took a step up and tried freezing under a thermal gradient, meaning cold temperatures aren’t applied uniformly throughout the entire suspension. This gave researchers more control of the structure formed within the ice.

“This is when freeze-casting started gaining a lot of attention,” said Krysti Scotti, the lead undergraduate researcher on the SpaceICE project who will soon matriculate into a Ph.D. program with Dunand as her adviser.  “In this way, ice grows from top to bottom. The resulting porous structures are better controlled. They’re long and directional.”

The porosity of the materials left behind by freeze-casting is highly sought-after: it means less material is required to build. The ice creates a complex sheet pattern in the suspension as it freezes, leaving microscopic holes in the solid left behind after the ice is removed by sublimation (turned directly into a gas). The resulting material is lighter than a more solid material. This could mean less use of resources when building here on earth or in space.

Scotti has been working on freeze-casting with Dunand for a couple of years now. They’ve studied freeze-casting on parabolic flights – short and steep drops in retrofitted aircrafts that mimic zero gravity. But those have only been able to test freeze-casting for 30 seconds or so. With the current SpaceICE mission, they will be able to study freeze-casting for six straight months.

Although freeze-casting sounds like just melting and freezing water, the process involves many steps, notably, making a suspension to freeze.

A suspension involves a liquid and some sort of particulate matter such as silver-coated glass. Particles in the liquid need to be able to move in response to the formation of ice crystals. If the particles all settle at the bottom, they might prevent ice crystals from forming, or they might be too heavy to form structures in response to the ice. Making the suspension alone takes a few hours, and the suspension must often be refreshed in order to complete accurate experimentation.

In fact, the SpaceICE team devoted months to merely finding the right particulate to suspend. They needed a suspension that would remain suspended for six months in space as well as up to six months of storage time between finishing the satellite and launching it into space. They eventually settled on silver-coated glass balls suspended in water. Each ball is 45 microns in size, about half the width of a human hair.

See the video where Scotti and another undergraduate, Jonathan Young, mix the suspension Jonathan will study as part of his senior design project.

Once the suspension is made (a) SpaceICE places it on a cold plate. Following the diagram below, the water closest to the plate will begin to nucleate, and ice crystals will begin to grow upwards, pushing the suspended particles out of the way (b). The ice crystals will continue to grow, forcing the suspension particles into an “accumulation region.” As the ice grows, the accumulation region will grow as well until the particles begin to push down in between the ice crystals (c). The suspension will freeze completely (d) and then researchers will remove the ice using a freeze-dryer (e). The remaining microscopically porous structure will be very fragile until SpaceICE bakes the structure, binding everything together (f) to create a new structure.

***
SpaceICE’s immediate goal is to improve terrestrial fabrication methods. By studying how freeze-casting occurs in space, without gravity, they can better understand how heating and cooling will affect fabrication of porous structures. Much of this work is novel.

Right now, freeze-casting is still relatively new in the literature, making SpaceICE somewhat of a pioneer in the field. But Scotti is adamant about making the freeze-casting literature open source. She built a website, http://www.freezecasting.net/, to catalogue and chronicle all freeze-casting research.

“The site is up-to-date, other than all the stuff we’ve been working on over the past few months,” Scotti said, while soldering a computer SpaceICE has designed for taking temperature readings. When their satellite launches in 2018, it will send loads of new information back down to earth about the freeze-casting process and what it can do.

Scotti also wanted to make clear that while freeze-casting is exciting, it’s not all that Dunand’s lab works on. “People forget that the Dunand lab does other stuff than freeze-casting. In fact, freeze-casting is a very small percentage of what everyone actually does.”

On SpaceICE alone, engineering mingles with coding, the multitude of students working to build a machine to house the freeze-casting. Dunand advises a number of other materials science graduates and undergraduates who do nothing with freeze-casting at all.

But freeze-casting is an exciting experiment right now, and pretty much all anyone on SpaceICE can think of as they scurry to complete senior design projects on the topic due in just a few short weeks before classes end for the summer.

Photo at top: Undergraduate Jonathan Young of the SpaceICE lab shows off a finished suspension of titanium oxide that he will use to conduct freeze-casting experiments for making materials in space. (Lily Williams/MEDILL)