By Xiumei Dong and Jack Adams

On March 11, Trump supporters from across the Chicago area gathered to see their candidate at the UIC pavilion. But they were disappointed. Protesters managed to shut down the rally, causing enough chaos for Trump to cancel his appearance. Before that happened, we spoke to a few Trump fans about why they support Trump.

Tom Piper
Piper said he supports Trump because Trump says he believes in America and will increase the prestige of the United States. Piper said he supported George W. Bush, but he thinks Bush compromised his principles, something he doesn’t think Trump will do.

What’s most attractive about Trump to Piper is that Trump isn’t perfect and doesn’t try to be. Piper said he thinks too many politicians try to cater to the voters, but not Trump.

“There’s that fear of political correctness,” Piper said. “That’s the world we live in.”

Piper said he doesn’t believe that Trump won’t let Muslims or Mexicans into the United States, and he doesn’t think anyone believes that.
[soundcloud url=”https://api.soundcloud.com/tracks/252184116″ params=”auto_play=false&hide_related=false&show_comments=true&show_user=true&show_reposts=false&visual=true” width=”100%” height=”450″ iframe=”true” /]

John Quaas is a student at St. Ignatius High School who came to see Trump at his Rally in Chicago. (Jack Adams/Medill)

John Quaas
Quaas said he likes Trump because he isn’t a professional politician and that he thinks the founding fathers never intended for the people to make a living off of their political careers.

Quaas admitted Trump might not have specific details about how he would administrate as president, but he thinks that Trump will listen and fix America’s problems.
[soundcloud url=”https://api.soundcloud.com/tracks/252184119″ params=”auto_play=false&hide_related=false&show_comments=true&show_user=true&show_reposts=false&visual=true” width=”100%” height=”450″ iframe=”true” /]

Jimmy Suska
Suska said he likes Trump because the candidate says what’s on his mind, unlike other candidates, whom he said are coached to say what people want to hear.

Matt Brown
Brown said he supported Chris Christie until he dropped out and endorsed Trump. Brown said he is attracted to Trump’s candidness, which he admitted has made some groups feel bullied.

“Being a white male, he hasn’t offended me yet,” Brown said. 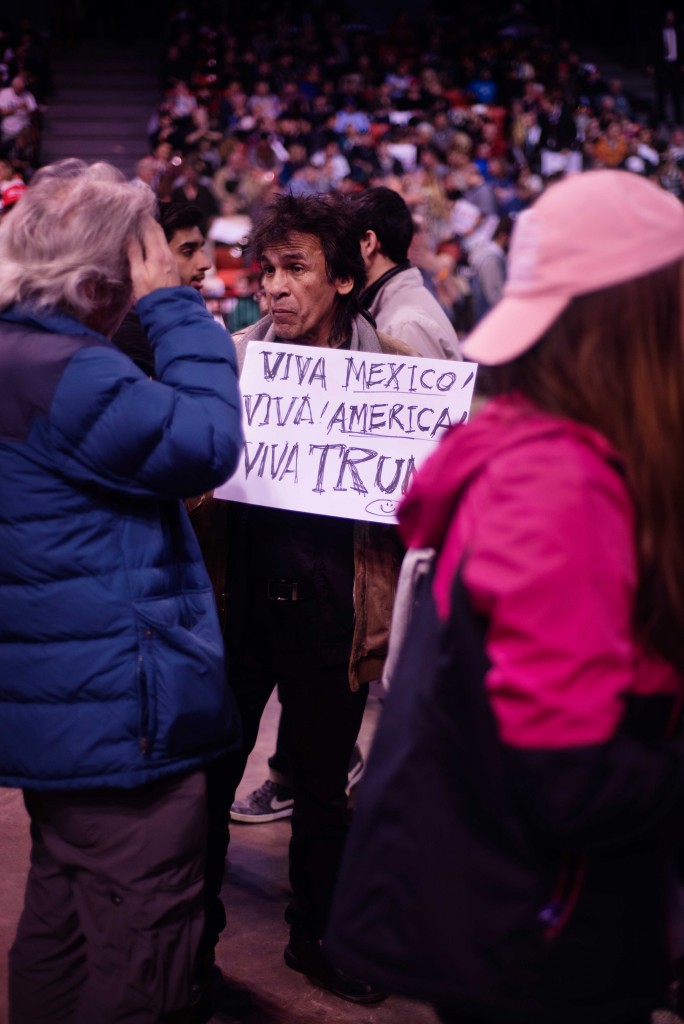 Kat Perez
Perez said he is a Mexican-American and a Trump supporter. He said that unlike most Mexicans, he understands Trump. Trump resonates with Perez because both are Christian, family men.

He thinks Trump’s proposed wall between the United States and Mexico is a metaphor. But even it were a tangible wall, Perez said he thinks the wall would be permeable and provide avenues for undocumented Mexicans in the United States to return to Mexico and become documented. He said Mexicans don’t want to leave Mexico; it’s a paradise. But the lack of jobs leaves them little choice.

“I don’t think [Trump] is racist,” said Travis Massenburg, 27, and African-American owner of a movie company.

Massenburg was at the rally with his mother, whom he says is a Democrat. Massenburg supports Trump because he thinks Trump is the best choice for the economy. He said America’s presence on the word’s stage has become weak. Massenburg said people like Trump because America needs a leader to stand up for what people truly believe in.
[soundcloud url=”https://api.soundcloud.com/tracks/252184249″ params=”auto_play=false&hide_related=false&show_comments=true&show_user=true&show_reposts=false&visual=true” width=”100%” height=”450″ iframe=”true” /] 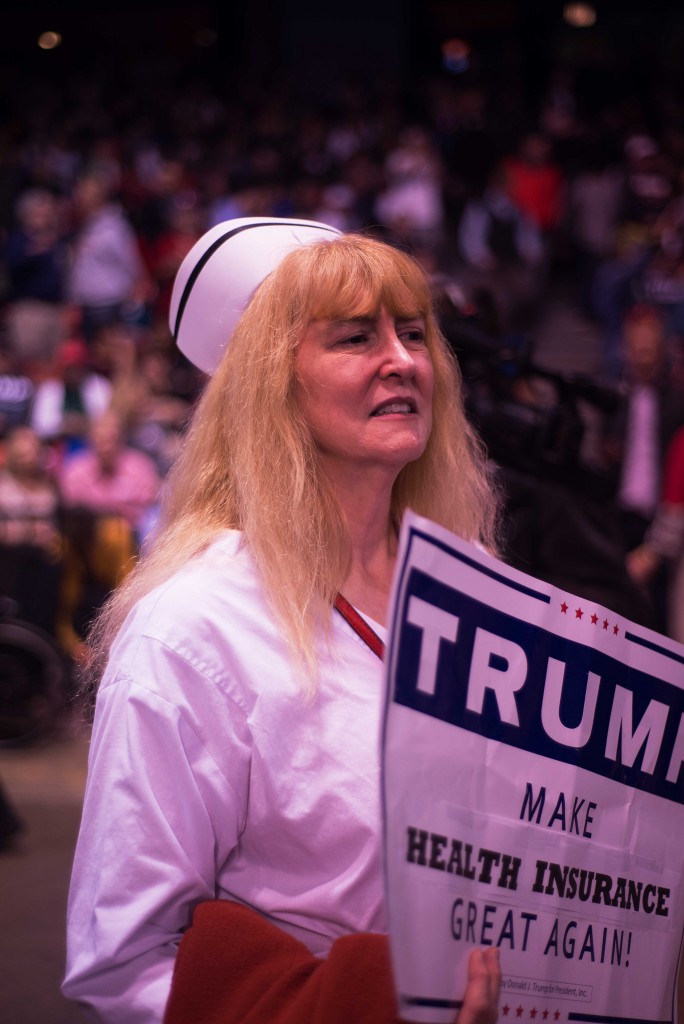 Linda Slabaugh came to the Trump rally to show her support. (Jack Adams/Medill)

Linda Slabaugh, 52, is a nurse and an attorney. She said she supports Trump primarily based on his health care reform policy.

Slabaugh said she does not like the Affordable Care Act because she thinks it is “corporate welfare for the insurance company,” in which people pay for a product they aren’t covered for because the deductibles are often too high.

Slabaugh said healthcare is a business and for any business the price should be transparent.

“One thing I like about [Trump’s policy] is the pricing transparency he is pushing,” Slabaugh said. “For example, in the United States, we don’t list health care prices.”
[soundcloud url=”https://api.soundcloud.com/tracks/252184252″ params=”auto_play=false&hide_related=false&show_comments=true&show_user=true&show_reposts=false&visual=true” width=”100%” height=”450″ iframe=”true” /]

“I mean everyone else just isn’t a good fit for the job,” said computer programmer John Christiansen, 25. “It is not that Trump is good–it is that everyone else is bad.”

Christiansen said Trump’s message is a simple one. “Just making America great again,” Christiansen said. “There is nothing really specific about it, but it is a nice, positive message.”

Photo at top: Tensions between Trump supporters and protesters rise after Trump announces that he won’t make an appearance at the rally in Chicago. (Jack Adams/Medill)